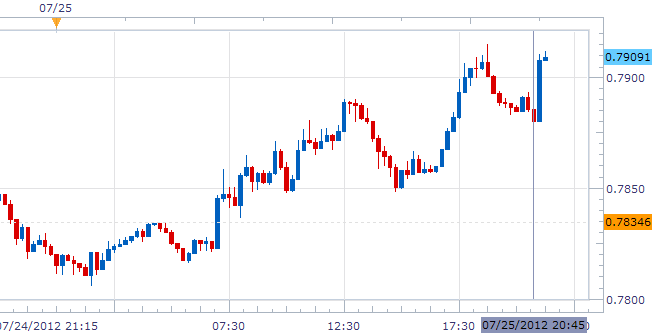 The Reserve Bank of New Zealand decided to hold the Overnight Cash Rate(OCR) at 2.50 percent, The kiwi responded by jumping 25 pips. The accompany press release read vary similar to past rate decisions, highlighting the Reserve Bank of New Zealand Governor Bollard’s wait and see policy. Bollard’s statement remained optimistic about the future of the New Zealand economy, “[T]he Bank continues to expect economic activity to grow modestly over the next few years”. Although the Reverse Bank Governor mentioned that the exchange rate is still negatively impacting demand growth. The press release went on to address the historically low inflation, “[A]nnual inflation, which recently moved below 2 percent, is expected to settle near the mid-point of the target range”.

The NZDUSD was in a general up trend during today’s trading session and pull back slightly before the announcement. The pair surged following the announcement reaching just a few pips short of the intraday high.

The Kiwi displayed significant price action to the rate decision, despite the fact that market participant were only pricing in an 8 percent chance of a 25 bps rate cut. The appreciation may have been trader’s reaction to the press release. The press release mitigated concerns that the economic conditions in New Zealand would require a rate cut, which would make the Kiwi’s carry trade less attractive.