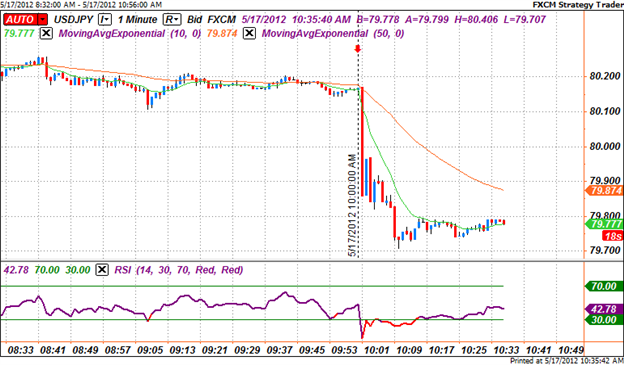 THE TAKEAWAY:U.S Leading Indicators Fell 0.1% in April; Philadelphia Index Declined to Minus 5.8 in May > Deterioration in Labor and Housing Condition > USD Falls

The results of the Philadelphia Federal Reserve’s manufacturing survey and the U.S. Leading economic indicators index for April released at 10:00 EST today both missed consensus forecast, pointing to slow growth in the world’s largest economy towards the middle of the year

The U.S. Leading Economic Indicator, a gauge of the economic outlook for the next three to six months, unexpectedly declined for the first time in seven months in April over deterioration in labor and housing markets.

The index retreated 0.1 percent in April, in contrast with 0.3 percent gain in March and 0.7 percent rise in February, the Conference Board reported today. The readingmissed median projections of a 0.1 percent gain from forty-nine economists surveyed by the Bloomberg News.

Building permits index slumped 0.2 percent after rising 0.23 percent in March and 0.09 percent in February. Additionally, jobless claims index worsened 0.19 percent while average workweek edged up 0.19 percent. Stock prices indicator unexpectedly declined for the first time since October 2011. Besides, all three manufacturing indexes showed no sizable gains in the month. It’s evident that U.S. economic recovery has been exposed to risks from the Eurozone sovereign debt crisis and slow growth in China.

The Philadelphia Fed Index fell into the negative territory for the first time since September 2011, indicating shrink in the regional manufacturing activity. The results from the Business Outlook Survey of Federal Reserve Bank of Philadelphia showed the index slipped to minus 5.8 this month from 8.5 in April to hit the lowest level in eight months. The print surprised market participants as economists widely expected the reading of 10.0 this month.

The Philly Fed Index gauges changes in business growth in the third district including Pennsylvania, New Jersey and Delaware. The index above 0 indicates factory-sector expansion while below 0 indicates contraction.Within the Philadelphia Fed survey, indexes for new orders tumbled to minus 1.2 in May from 2.7 in the previous month due to lower demand for manufacturing goods from Europe and China. Besides, more firms for the first time reported price declines for their product than prices increase. Indexes for prices paid and price received both notably decreased this month.The level of employment worsened with both average employee workweek and number of employees indexes falling into a negative territory.

Manufacturing executives are less optimistic about the long-term business outlook. The future general index significantly plunged to 15.0in May from April’s 33.8. Firms’ responses suggesteddeterioration in new orders and shipment in coming months. Similarly, firms also revealed negative signal in their hiring plan in intermediate term.

The U.S. dollar edged lower versus most of its major trading partners except its Canadian counterpart in the minutes following the dismal Leading Indicators and Philly Fed Index reports. Data released this early morning also showed that more Americans filed applications for unemployment benefit last week. As seen from the 1-minute USDJPY chart above, the greenback immediately slipped 50 pips from 80.2 to 79.7 within 10 minutes, trades at 79.77 at the time this report was written.