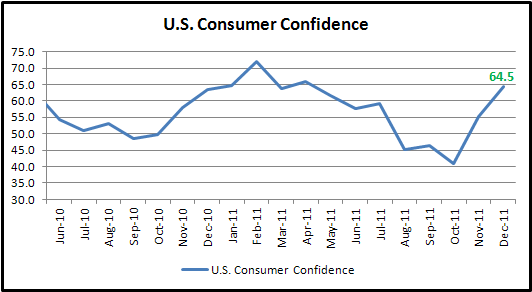 U.S. consumers’ confidence toward the world’s largest economy climbs in December to highest level since April 2011 as employment enhances the most in two years and a half and the domestic economy continues to consolidate towards the end of 2011. The Conference Board Consumer Confidence Index, a barometer of the health of the U.S. economy from consumers’ prospective, rebounded for the second straight month from the mid-autumn slump, rising 9.3 points to 64.5 in December from 55.2 in November. The reading also beats consensus forecasts as economists polled by Bloomberg News survey had projected a modest gain to 58.9.

The Conference Board Index rose more than estimates in December as consumers stoke optimism over business conditions, employment prospects and their financial situations. Consumers’ attitude toward “good” business conditions increased to 16.6 percent from 13.9 percent while those toward “bad” conditions fall to 33.9 percent from 38 percent. Meanwhile, consumers’ outlook for the job market continued to be more favorable, with numbers of predictions on more jobs created in the month rising to 13.3 percent from 12.4 percent while projections on fewer job added declining to 20.2 percent from 23.8 percent. In fact, the U.S. job market appeared to have improved in recent months as unemployment rate fell to 8.6 percent in November, the lowest rate since March 2009 and claims for unemployment benefits dropped to the lowest level in nine months. Besides, consumers’ outlook over the next six months also strengthens with 16.7 percent of respondents expecting better business conditions in short-term compared to 13.7 percent in the previous month. Obviously, higher consumer confidence raises hopes on more spending and house purchases that significantly contribute to U.S. economic growth on the first quarter of 2012. Nonetheless, the outlook for the U.S. economy also depends on external sources such as Eurozone’s progress on sovereign debt crisis solving and sustainable growth in emerging countries. 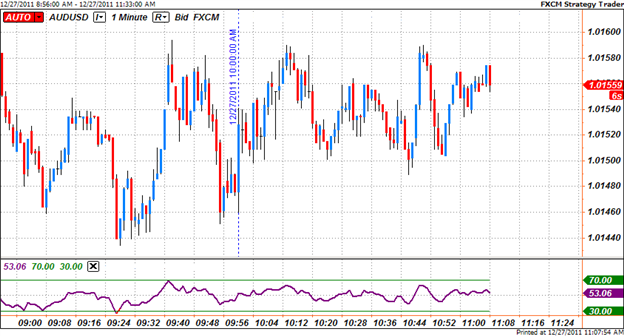 U.S. dollar has traded mixed in the North American trading session today, as the greenback strengthens against high-yielding currencies but weakens versus euro, Swiss franc and Japanese Yen. Market participants’ reactions fairly muted though the consumer confidence index for December soars to the eight-month high level. This might be explained by low trading volume during holiday week. As can be seen from the 1-minute AUDUSD chart above, the currency pair had traded in a narrow range between 1.0150 and 1.0159 following the report. The Relative Strength Indicator lying between 30-level and 70-level, indicating neither overbought nor oversold reactions regarding to the currency pair.