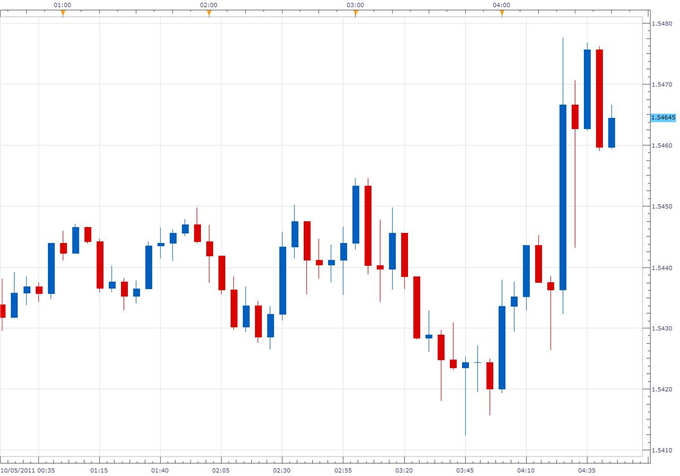 The final print of Q2 UK GDP was released this morning and it came in softer than expected; quarter-on-quarter the economy grew 0.1% missing expectations of 0.2%, marking the slowest quarter of growth – excluding the snow induced contraction in Q4 2010 – since exiting the recession back in Q4 2009. On the annual front GDP came in at 0.6% below expectations of 0.7%, marking a dramatic slowdown from 1.6% seen in Q1 and the lowest growth since exiting the recession.

Also released this morning was the UK services PMI for September which came in healthily better than expected at 52.9, amid expectations of 50.5, climbing off the 8-month low of 51.1 posted in August. This comes after a solid looking PMI manufacturing showing on Monday and a soft PMI construction reading yesterday. With manufacturing and services making up a lions share of the economy and construction only accounting for 15% the PMIs from September tell a relatively encouraging story and suggest the UK might be able to avoid slipping into negative growth in Q3 2011.

The Bank of England looks poised to enact further quantitative easing measures – possibly as early as at tomorrows rate announcement – which should also serve as a support for growth; the UK looks like it should be able to, just, avoid negative growth in coming quarters so long as the global economy doesn’t shift down another gear. As such while our outlook for the beleaguered island nation is far from upbeat it also isn’t as negative as that of some other nations. However, should growth in the EMU, a key trade partner of the UK, stagnate for an extended period and UK exports take a prolonged dip into contraction we could see things worsening in coming quarters.

The immediate market reaction to the softer than expected data was actually largely positive with market expectations being centred on a much softer, contractionary reading. The fact that the UK managed to eke out positive growth in Q2 and has posted some upbeat PMIs in recent days has sparked a relief rally intraday. 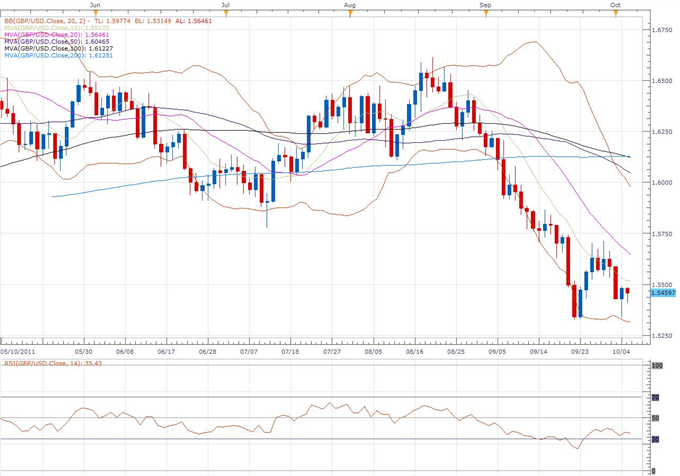 Despite the positive market reaction the pound remains under the cosh on daily charts as many speculators expect the central bank to enact further easing measures, which are net Sterling negative, in coming months and are positioning accordingly. In addition, as Greece circles and drain and contagion risks look set to be spreading from sovereigns to banks risk aversion continues to dominate which is lifting the buck. As a result, even if the outlook for the UK isn’t a bad as previously efforted and the economy may be able to eke out some positive growth in H2 2011 the outlook is still pretty bleak with risks skewed to the downside, keeping the pressure on the pound against the buck. But, should the UK economy manage to keep its head above the water we could see the pound outperform against the euro. For a full technical outlook.