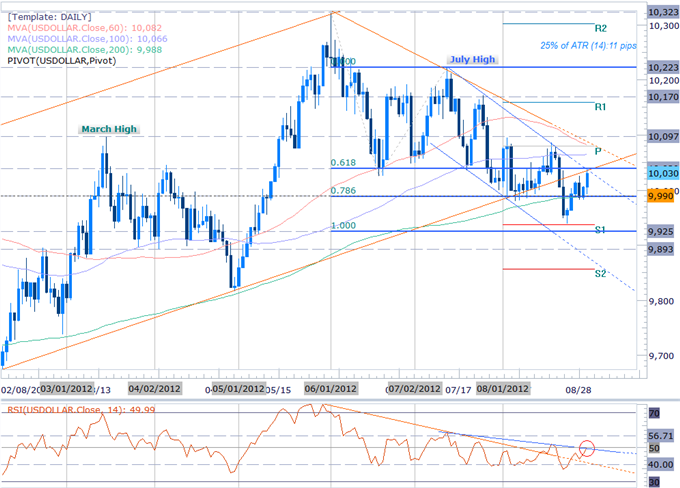 The greenback is markedly stronger at the close of North American trade with the Dow Jones FXCM Dollar Index (Ticker: USDOLLAR) advancing 0.24% on the session after moving a full 106% of its daily average true range. The gains come on the back of a risk sell-off that saw global equity markets trade deep in the red ahead of tomorrow’s highly anticipated speech from Fed Chairman Ben Bernanke at the Jackson Hole Economic Policy Symposium. His remarks will take central focus tomorrow amid ongoing speculation that the central bank is poised for another round of quantitative easing. While I do not expect that Bernanke will cite an outright commitment to QE3, it is likely that he will continue to feed market expectations for additional support with speculation circulating that the Fed may look to implement a “new” form of QE to help boost the domestic recovery. In any event, the fate of the dollar hangs in the balance with any references to additional stimulus measures by means of direct Fed purchases likely to weigh heavily on the greenback. On the other hand, should the chairman fail to impress market participants, look for risk to remain under pressure with such a scenario opening the door to further dollar advances in the weeks to come. By the close of trade in New York all three major stock indices were in the red with the Dow, the S&P and NASDAQ off by 0.81%, 0.78% and 1.05% respectively.

The dollar pushed further away from critical daily support at the confluence of the 200-day moving average and the 78.6% Fibonacci extension taken from the June and July highs at 9990. The index now looks to challenge key topside resistance at the three-way confluence of channel resistance dating back to the July high, former channel support dating back to the February low, and the 61.8% Fibonacci extension at 10,039. A breach above this mark dispels further downside pressure in the near-term with such a scenario eyeing topside targets at the 100-day moving average at 10,066 and the monthly pivot at 10,080. Note that RSI is now pressing trendline resistance dating back to the July high with a breach above this mark (also the 50-thredhold) offering further conviction on our directional bias. 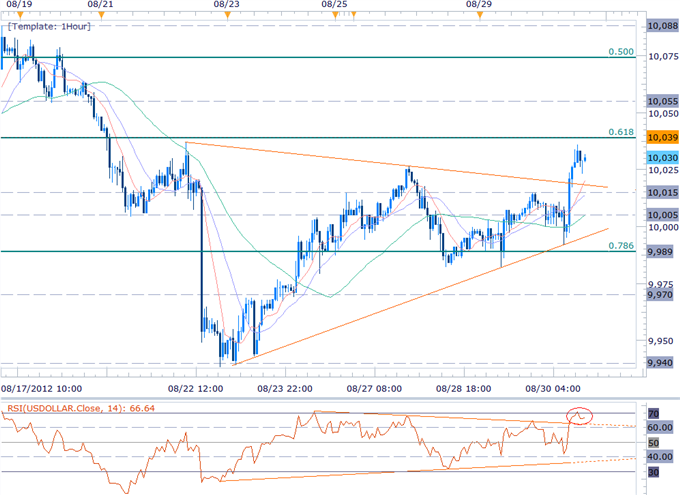 An hourly scalp chart shows the index breaking out of a short-term triangle formation before stalling just ahead of the key 61.8% extension at 10,039. A breach above this mark eyes subsequent intra-day resistance targets at 10,055, the 50% extension at 10,074, and the August 17th high at 10,088. A break back below the 10,005/10,015 congestion region exposes critical support at 9990 backed by 9970, and the 3-month lows at 9940. Note that RSI has now broken-out of a multi-session triangle with only a break back below the 50-threshold risking a near-term correction lower. With Bernanke on tap tomorrow, traders are advised to use caution as remarks made by the Fed Chairman are likely to fuel increased volatility as investors weigh the prospects for future monetary policy.

The greenback advanced against three of the four component currencies highlighted by a 0.57% advance against the Australian dollar. Risk aversion flows have continued to weigh on the high yielder with the aussie breaking below the 200-day moving average to close the session just below the 1.03-handle. Our next downside objective is held at 1.0220 with only a breach above 1.0415 invalidating our near-term bias. The Japanese yen is the strongest performer of the lot with an advance of 0.06% despite broader dollar gains. The low yielder has continued to benefit from risk-of flows as investors take to the sidelines ahead of Bernanke with the yen advancing against all its major counterparts in US trade. For a complete technical outlook on the USDJPY and the AUDUSD, refer to today’s Winners/Losers report.

Join Michael on Tuesday morning for a Live Scalping Webinar on DailyFX at 1230GMT (8:30ET)