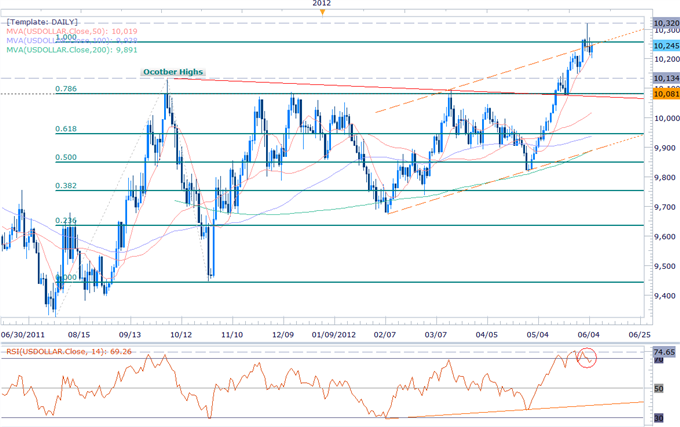 The greenback is firmer at the close of North American trade with the Dow Jones FXCM Dollar Index (Ticker: USDOLLAR) advancing 0.20% on the session after moving a full 103% of its daily average true range. The gains come despite strength in equity markets with Dow snapping a four day losing streak amid thin-volume after a stronger-than-expected service sector report and a lack of headlines out of Europe saw broader risk assets drift higher ahead of tomorrow’s highly anticipated ECB interest rate decision. While the central bank is widely expected to hold the benchmark interest rate at 1.0%, investors will lending a keen ear to remarks made by ECB president Mario Draghi as he offers his assessment of the current conditions and expectations for future monetary policy. Look for markets to remain rather muted as we head into the decision with the dollar likely to remain well supported in the interim. Markets were firmer at the close of trade in New York with the Dow, the S&P and NASDAQ advancing 0.22%, 0.57%, and 0.66% respectively.

The dollar closed the session just below key resistance at the 100% Fibonacci extension taken from the August 1st and October 27th troughs at 10,255. A daily close above this mark puts our initial objective at 10,320 in view with stronger resistance seen at higher at 10,340. Interim support continues to rest with the former October high at 10,134 and is backed by the 78.6% extension at 10,080. A break below this level negates our bullish outlook in the interim with such a scenario suggesting a more substantial dollar correction may be underway. Note that daily RSI looks poised for another topside break above the 70-overbought threshold, suggesting further topside moves in the index over the coming sessions. 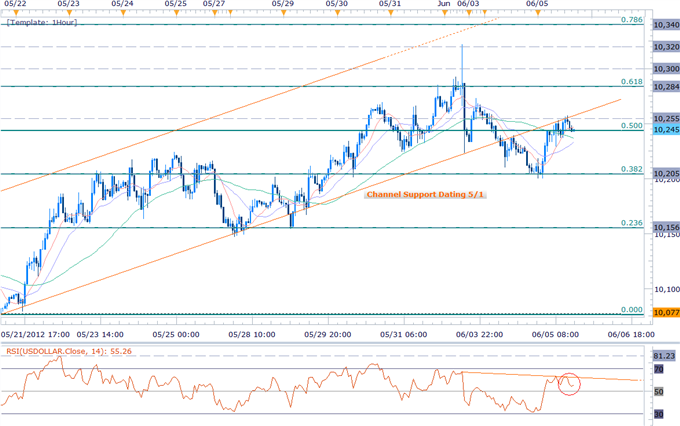 An hourly chart shows the index breaking below channel support dating back to May 1st before rebounding off the 38.2% Fibonacci extension taken from the April 30th and May 21st troughs at 10,205. Note that the index held a tight range into the close below former channel support (now resistance) and the 50% extension at 10,245. A subsequent break-down from these levels confirms the break of the channel with such a scenario eyeing interim support targets at 10,205, the 23.6% extension at 10,156 and 10,100. A breach back within the confines of the channel negates the recent break with such a scenario eyeing topside targets at the 61.8% extension at 10,284, 10, 300, and Friday’s NFP highs at 10,320. Look for the dollar to remain rather subdued ahead of tomorrow’s ECB rate decision with a breach above the 61.8% extension offering further conviction on our directional bias.

The greenback advanced against three of the four component currencies highlighted by a 0.49% advance against the Japanese yen which declined against all its major counterparts in US trade. Remarks made by Japanese Finance Minister Jun Azumi weighed on the low yielder as he cited concerns over excess moves in the FX markets while adding that the recent appreciation in the yen continues to dampen prospects for the export-led economy. While we have maintained our bullish USD/JPY bias, it’s important to note that extreme bouts of risk-off flows are likely to keep the pair under pressure as positive real interest rates in Japan continue to increase the currencies appeal as a store of wealth (ie. haven play). For a more in-depth technical outlook on the pair refer to yesterday’s Winners/Losers report.

The Australian dollar was the strongest performer of the lot with the high yielder advancing 0.11% on the session despite the RBA’s move to cut interest rates by 25 basis points last night. While our medium-term bias on the pair remains weighted to the downside, it’s worth noting that the rebound off the 2012-lows may yet have further to go as we clear out some shorts here and markets re-balance. That said, tonight’s print on 1Q GDP may be just the catalyst needed trigger the resumption of the downtrend with our primary objective eyed at 161.8% Fibonacci extension taken form the February and April highs at 9455. For a complete outlook on the AUD/USD including up-to-date scalp targets, refer to today’s Winners/Losers report.