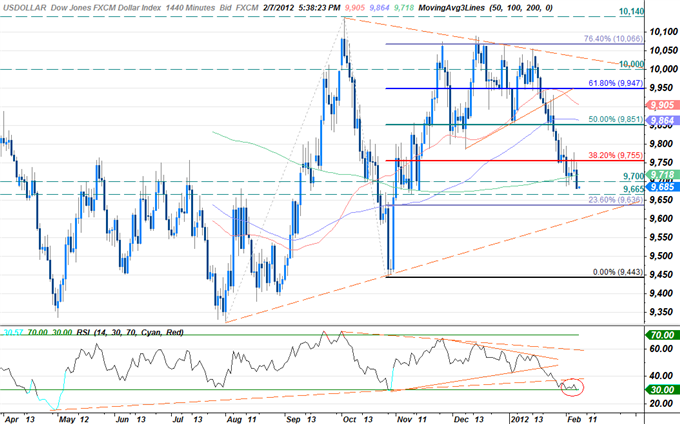 The greenback is weaker at the close of North American trade with the Dow Jones FXCM Dollar Index (Ticker: USDOLLAR) off by 0.46% on the session. Risk appetite rose sharply today amid rumors that Greece was in the final stages of drafting a proposed agreement on austerity measures required by the Troika in order for the debt laden country to receive the next tranche of bailout funds to the tune of €130 billion. While early reports suggested a deal was at hand, the meeting between Greek Prime Minister Lucas Papademos and party leaders was later postponed until tomorrow. Reasons for the delay have not been cited as of yet. Nonetheless, the rally in risk helped equities pare early losses with the Dow, the S&P, and NASDAQ closing higher by 0.26%, 0.20%, and 0.07% respectively. Meanwhile the dollar has remained under tremendous pressure as improved risk appetite continued to see investors jettison the reserve currency in favor of higher yielding assets.

The dollar broke below key support at the 200-day moving averages with the index closing sub 9700 at 9681. The dollar now faces further significant downside risk with the daily relative strength index looking to break below the 30-oversold level. Only a break above former RSI support dating back to May 2nd would alleviate some of the pressure for the greenback with such a scenario eyeing topside targets above 9700.Initial support now comes into play at the November lows at 9665. 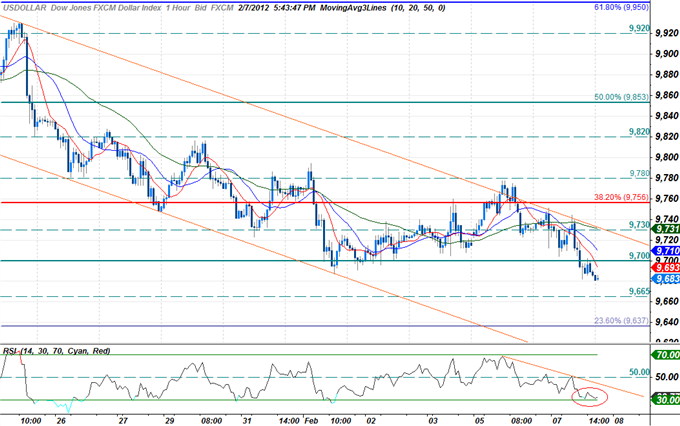 An hourly chart shows the index continuing to hold within the confines of a descending channel formation dating back to January 15thwith the dollar breaking below the 9700 before settling above the November lows at 9675. Subsequent support targets are seen at the 23.6% Fibonacci extension taken from the August 1st and October 27th troughs at 9637, 9600, and 9575. Initial topside resistance holds at the convergence of channel resistance and the 9700 mark backed by 9730, and the 38.2% extension at 9756. A breach above this level takes the greenback out of harm’s way with longer-term targets held at the 50% extension at 9850. Look for a break above short-term RSI resistance dating back to yesterday’s high to trigger a pullback in the index.

The greenback declined against three of the four component currencies highlighted by a 1.03% decline against the euro. As markets await further details of the proposed Greek deal, the single currency still remains at risk with a failure to secure further aid risking substantial euro losses. That possibility aside, the euro has now broken key resistance levels with the single currency eyeing interim daily resistance at the 61.8% Fibonacci extension taken from the October 4th and January 16th troughs at the 1.33-handle backed by the 100-day moving average at 1.3330. (Chart below) 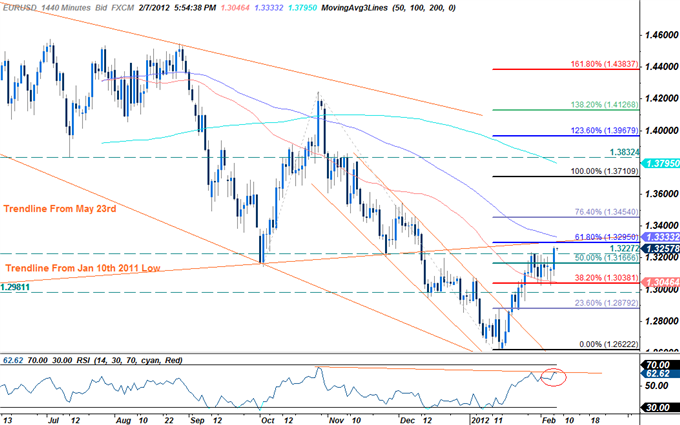 It comes as no surprise that the yen is once again the weakest performer of the lot, with a decline of 0.30% against the dollar. Although risk-on flows weigh on both of the low yielders, losses in the yen continue to outpace those of the dollar with the USD/JPY pair moving higher when demand for riskier assets increases. The yen remains the worst performing currency year-to-date against the greenback with a net advance of just 0.16% despite broad-based dollar losses. The next highest performer on the year dwarfs the yen’s advance with the sterling climbing more than 2.3% against the greenback.

With no economic data of note on the US docket, traders will continue to carefully monitor developments out of Europe with a confirmation for a Greek debt-swap deal likely to further support the risk rally at the expense of the dollar. Should Greece fail to seal the agreement, look for the dollar to pare a substantial portion of today’s losses as the periphery nation would now face the likelihood of a disorderly default with €14.4 billion in bond redemptions due next month.

Join Michael tomorrow for a Live Scalping Webinar at 1330GMT (8:30ET) to discuss the dollar and other current setups.