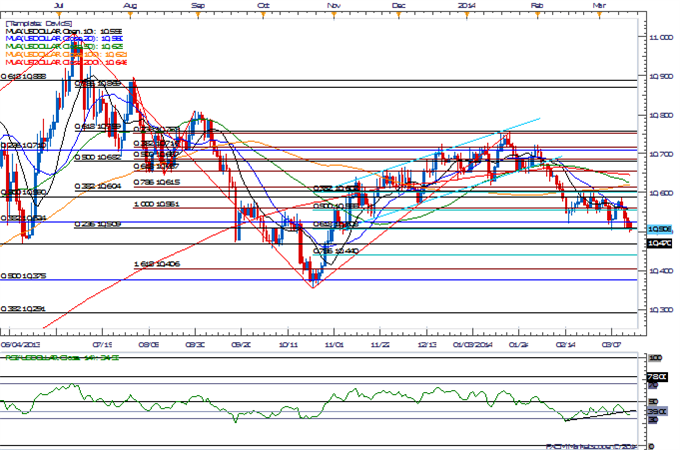 The Dow Jones-FXCM U.S. Dollar Index (Ticker: USDollar) may chop around ahead of the Federal Open Market Committee (FOMC) interest rate decision as it holds within the previous day’s range, but the fresh developments coming out of the policy meeting may set the tone for the remainder of the month as the central bank is widely expected to implement a ‘qualitative’ approach for monetary policy.

There’s growing speculation that the FOMC will tie its forward-guidance to a broad range of economic indicators as the jobless rate approaches the 6.5 percent threshold for unemployment, and we may see the dollar continue to give back the advance from back in October should Fed Chair Janet Yellen implement a more dovish twist to the policy outlook.

With that said, the USDOLLAR may continue to carve a series of lower highs & lower lows as the Fed remains reluctant to move away from the zero-interest rate policy, while we may see a growing rift within the committee as central bank hawks Richard Fisher and Charles Plosser look to normalize monetary policy sooner rather than later. 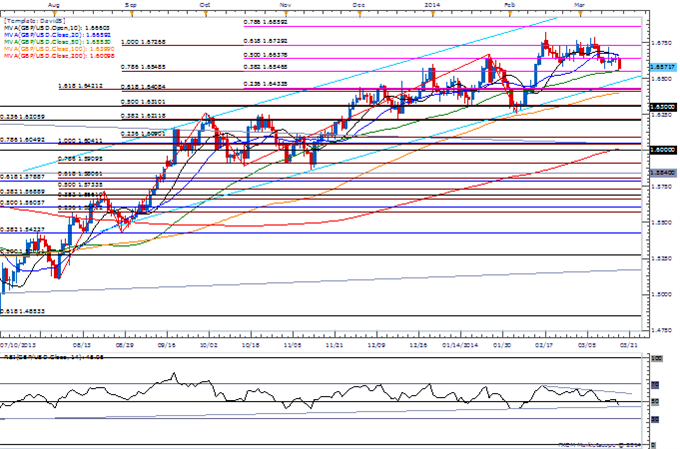 The Australian dollar continued to lead the advance against the greenback, with the higher-yielding currency gaining largely benefitting from the rise in risk appetite, while the British Pound is struggling to hold its ground ahead of the key economic releases coming out over the next 24-hours of trading.

Indeed, the GBPUSD threatened key support around the 1.6540-50 region amid the recent weakness in the European bloc, but another close above the 1.6600 handle should reinforce a bullish outlook for the pair as price and the RSI preserves the upward trend carried over from the previous year.

In turn, the GBPUSD may continue to carve a high lower in March, and we will revert back to ‘buying dips’ in the pair should the Bank of England (BoE) Minutes highlight a greater willingness to raise the benchmark interest rate off of the record-low.