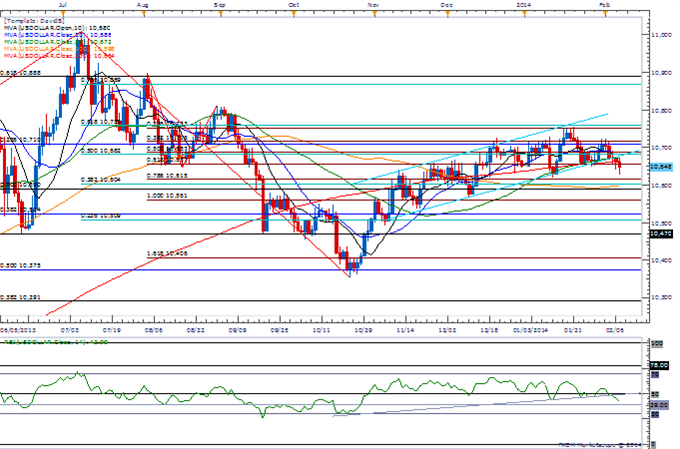 - USDOLLAR Searching for Support on Dismal NFP- 2014 Range at Risk

The Dow Jones-FXCM U.S. Dollar Index (Ticker: USDollar) slipped to a fresh monthly low of 10,630 following the dismal Non-Farm Payrolls (NFP) report, and the greenback may ultimately threaten the 2014 range as it searches for support.

Indeed, there’s growing speculation that the Fed may take a less aggressive approach in normalizing monetary policy amid the ongoing slack in the labor market, and the dollar may face further headwinds in the week ahead should we see a growing number of Fed officials scale back their willingness to taper the asset-purchase program at the March 19 meeting.

With Fed Chairwoman Janet Yellen scheduled to deliver the Humphrey-Hawkins testimony in front of Congress next week, the new central bank head may struggle to substantiate a further reduction in monetary support, but it seems as though the FOMC will stay on course as they anticipate a stronger recovery this year.

With that said, the near-term correction in the USDOLLAR may ultimately generate a higher low as the Fed looks to halt Quantitative Easing later this year, but the fiscal outlook may undermine the bullish sentiment surrounding the reserve currency should U.S. policy makers struggle to meet on common ground. 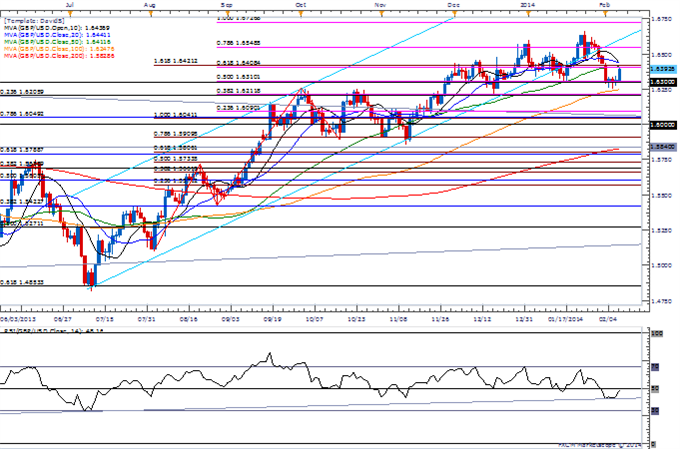 Three of the four components advanced against the greenback, led by a 0.44 percent rally in the British Pound, and the GBPUSD looks poised for a higher high following the constant closes above the 1.6300 handle.

In turn, it looks as though we have carved a higher low during the first full-week of February, and sterling may coil up for a more meaningful move at the 1.6700 handle as the Bank of England (BoE) looks to normalize monetary policy ahead of schedule.

The BoE’s quarterly inflation report highlights the biggest event risk for the Pound next week as market participants see Governor Mark Carney lowering the unemployment threshold down to 6.5 percent, but the central bank may merely implement a more dovish twist to its forward-guidance in an effort to strengthen its credibility.