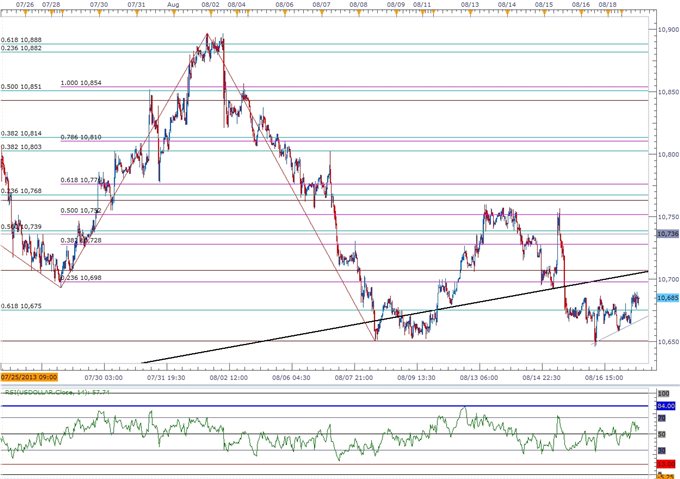 USD Correction Coming to an End- Key Levels/Themes to Watch

The Dow Jones-FXCM U.S. Dollar Index (Ticker: USDollar) is trading 0.11 percent higher from the open, largely driven by the weakness in the Australian dollar and the reserve currency may track higher ahead of the Fed Economic Symposium in Jackson Hole, Wyoming should the FOMC Minutes highlight an improved outlook for the U.S. economy.

Although the economic docket remains fairly light over the next 24-hours of trading, we’re seeing the reserve currency continue to carve a near-term base around the 38.2 percent Fibonacci expansion (10,652), and we may see a more meaningful rally ahead of the next Fed policy meeting on September 17-18 as scaling back on quantitative easing becomes a growing discussion at the central bank. Indeed, the dollar should continue to mark a series of higher highs paired with higher lows as the Fed looks poised to switch gears in the second-half of the year, and bullish sentiment surrounding the greenback may get carried into 2014 amid the shift in the policy outlook. 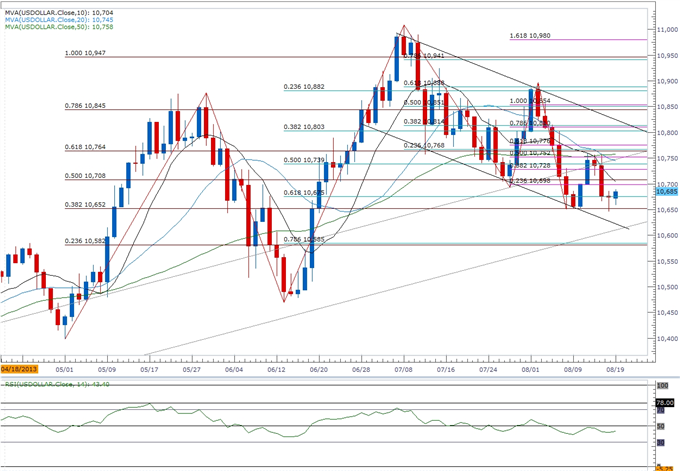 Dallas Fed President Richard Fisher – who will serve on the FOMC in 2014 – argued that U.S. bond-yields are on the rise as market participants realize that ‘there’s not QE infinity,’ and favored tapering the asset-purchase program as the economic recovery gradually gathers pace.

Despite the growing arguments to halt the Fed’s easing cycle, we may need a more meaningful catalyst to see a move back above the 10,800 region, and the dollar remains poised to threaten the bearish trend carried over from the previous month as the outlook for growth and inflation improves. 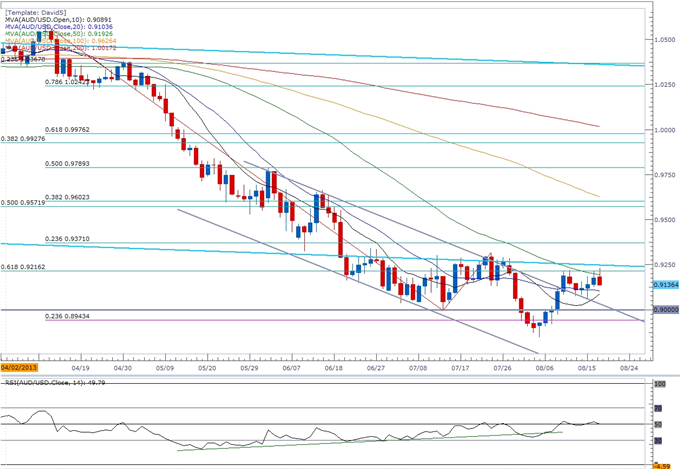 Two of the four components weakened against the greenback, led by a 0.52 percent decline in the Australian dollar, and the higher-yielding currency may face additional headwinds over the next 24-hours of trading should the Reserve Bank of Australia (RBA) Minutes highlight a weakened outlook for the $1T economy.

Indeed, we are likely to see Governor Glenn Stevens retain a cautious outlook for the region amid the slowing recovery, and the central bank head may make further calls for a lower exchange rate, which raises the risk of seeing another selloff in the AUDUSD.

At the same time, the RBA may keep the door open to push the benchmark interest rate to a fresh record-low in order to address the risks surrounding the region, and we will look to sell rallies in the AUDUSD as the pair appears to be carving a lower high around the 61.8 percent Fibonacci retracement (0.9210-20).