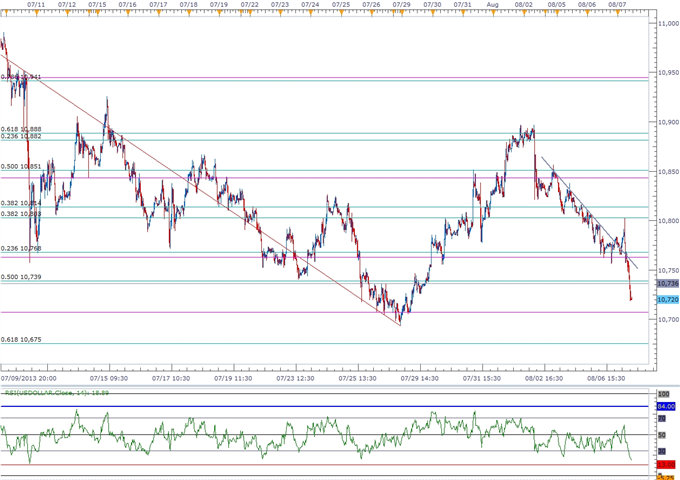 The Dow Jones-FXCM U.S. Dollar Index (Ticker: USDollar) is 0.52 percent lower from the open after failing to push back above the 38.2 percent Fibonacci retracement around 10,803, and the reserve currency may continue to drift towards the 50.0 percent expansion around 10,708 as it searches for support.

Although the 30-minute relative strength index highlights an oversold signal, we need to see the oscillator push back above 30 to see a near-term correction in the USD, but the bearish trend may continue to take shape over the remainder of the week amid growing speculation that the Federal Reserve will retain its current policy at the September 17-18 meeting. Indeed, Chicago Fed President Charles Evans sounded rather upbeat on the U.S. economy as he sees scope to tape the asset-purchase program later this year, and we may see the USDOLLAR carve out a higher low this month amid the ongoing discussion at the central bank to scale back on quantitative easing. 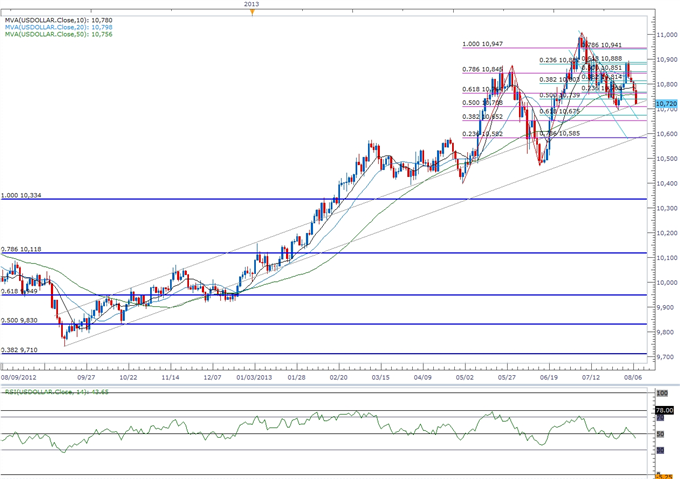 Cleveland Fed President Sandra Pianalto, who’s scheduled to join the FOMC in 2014, is scheduled to speak on monetary policy as well as the economic outlook at 13:40 EDT, and further comments supporting the central bank’s exit strategy may prop up the reserve currency as we see a growing number of Fed officials turn increasingly upbeat towards the economy.

It looks as though we’re seeing another test of former trendline resistance for support, which helped to produce a higher low in July, and the dollar may continue to produce a bullish pattern over the near to medium-term amid the shift in the policy outlook. In turn, we may look to implement our ‘buy the dip’ strategy, but would like to see a close above the trendline to see a more meaningful rebound in the dollar. 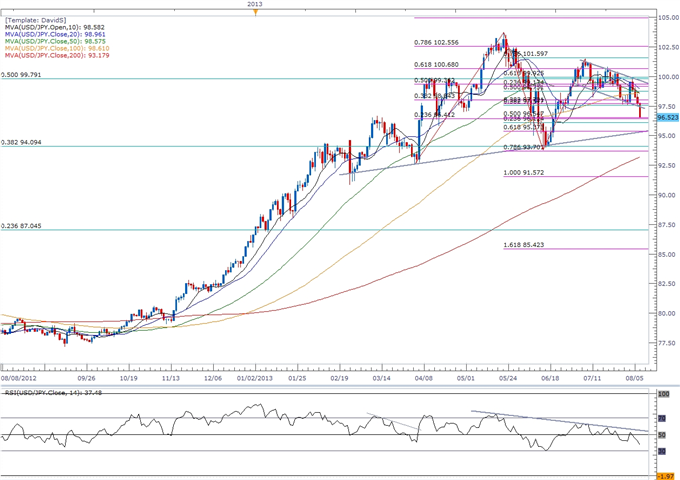 The dollar weakened across the board, led by a 1.24 percent rally in the Japanese Yen, and the low-yielding currency may continue to appreciate against its U.S. counterpart as the Bank of Japan (BoJ) is widely expected to retain its current policy in August.

Indeed, the BoJ’s wait-and-see approach has helped to encourage a larger correction in the USDJPY, with the pair coming up against some key Fibonacci figures, and we may see the pair consolidate ahead of the interest rate decision due out on August 8 as market participants weigh the outlook for monetary policy. As the growing rift within the BoJ makes it increasingly difficult for Governor Haruhiko Kuroda to implement more non-standard measures, a less-dovish central bank may present further declines in the exchange rate, and a break below 96.50

May threaten the upward trend dating back to February as the bearish trend in the relative strength index continues to take shape.

Nevertheless, we may see the USDJPY ultimately carve out a higher low this month should the BoJ show a greater willingness to further embark on its easing cycle, and the deviation in the policy outlook will continue to heavily impact this pair as the FOMC remains poised to shift gears later this year. --- Written by David Song, Currency Analyst