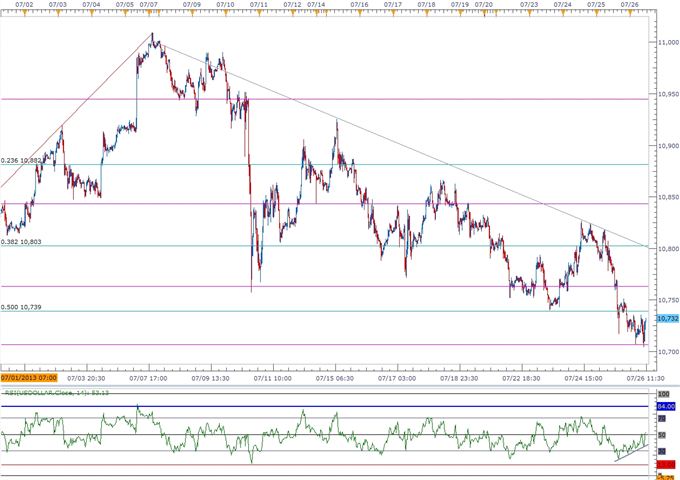 The Dow Jones-FXCM U.S. Dollar Index (Ticker: USDollar) is now trading 0.08 percent lower from the open after bouncing back from a low of 10,705, but we may see a larger correction in the greenback amid growing speculation that the Federal Reserve will strike a rather dovish tone for monetary policy at the interest rate decision scheduled for July 31.

As the greenback pierces below the 50.0 percent Fibonacci expansion around 10,708, the dollar looks poised for a more meaningful correction to the downside, and we may see the 30-minute relative strength index struggle to maintain the bullish trend from earlier this week as the index struggles to push back above the 50.0 percent retracement at 10,739. In turn, it looks as though the dollar correction will continue to gather pace in the days ahead, but will continue to look for a higher low in the greenback as the Fed appears to be slowly moving away from its easing cycle. 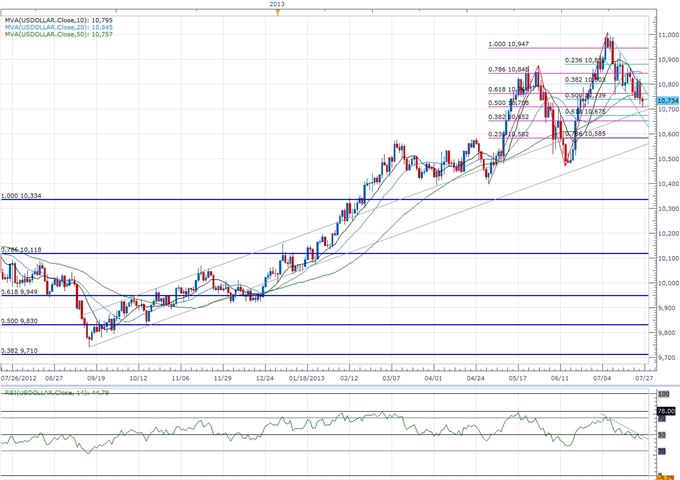 Although the upward revision in the U. of Michigan Confidence survey highlights an improved outlook for the U.S. economy, the bearish reaction in the greenback suggests that the report from Jon Hilsenrath– the unofficial mouthpiece for the Fed – will continue to dampen the appeal of the reserve currency, and the dollar remains at risk for further losses as the downward trending channel remains intact. As a result, the 61.8 percent retracement around 10,625 will serve as the next downside target for the greenback, but we will continue to look for a higher low going into August amid the growing discussion at the Fed to taper the asset-purchase program. 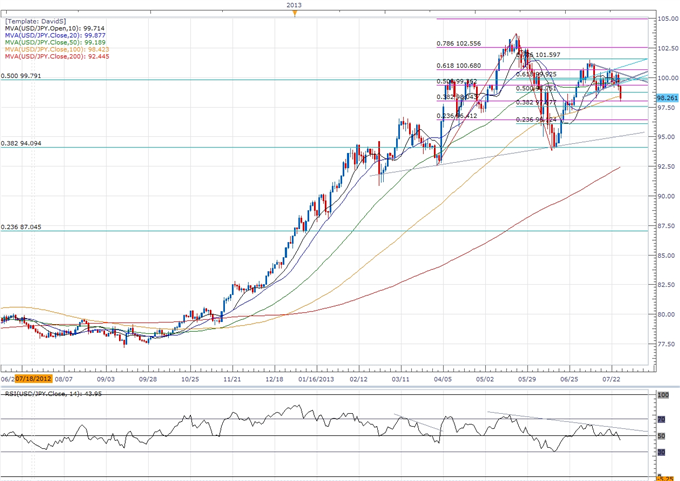 Three of the four components lost ground against the greenback, led by a 0.19 percent decline in the British Pound, while the Japanese Yen bucked the trend as the economic docket showed the headline reading for Japanese inflation topped market expectations, with consumer prices increasing an annualized 0.2 percent amid forecasts for a 0.1 percent print.

As the positive developments coming out of the world’s third-largest economy increases the Bank of Japan’s (BoJ) scope to retain its current policy, and we may see Governor Haruhiko Kuroda struggle to implement more non-standard measures over the near-term as there appears to be a growing rift within the central bank. As the BoJ assesses its impact on the real economy, the board may continue to sit pat at the August 8 meeting, and we may see a broader decline in the index as it breaks down of the upward trending channel from earlier this month.

With the USDJPY dipping below the 98.00 handle, we will be watching the 38.2 percent retracement coming in around 97.60-70, but should see a higher low being carved out in the days ahead as the deviation in the policy outlook continues to favor a bullish bias on a longer-term scale.