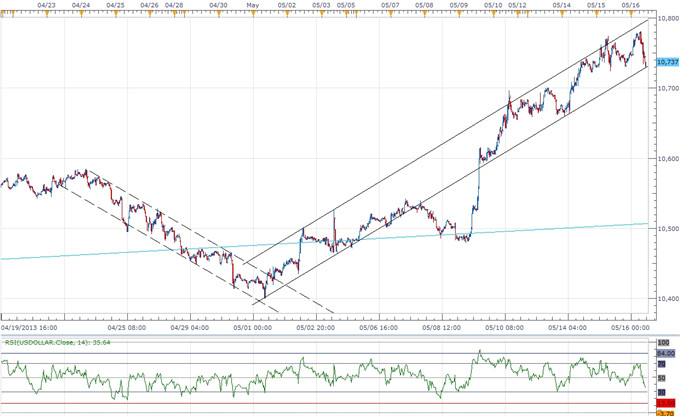 USDOLLAR to Search for Support- GBP Rebound to Accelerate

The Dow Jones-FXCM U.S. Dollar Index (Ticker: USDollar) is trading 0.03 percent lower from the open after giving back the advance to 10,781, and we’re seeing the greenback threaten the upward trend from earlier this month as the fresh batch of data coming out of the world’s largest economy appears to be showing a slowing recovery. Although U.S. Building Permits jumped 14.3 percent in April, the 16.5 percent decline in Housing Starts along with easing Consumer Prices may encourage the FOMC retain its highly accommodative policy stance throughout 2013, but we’re seeing a growing number of Fed officials scale back their willingness to expand the balance sheet further as the region gets on a more sustainable path. Should the dollar fail to hold trendline support, we will look for a move back towards the 10,600 region, but we will maintain a bullish outlook over the near to medium-term as the index continues to carve a series of higher highs paired with higher lows. 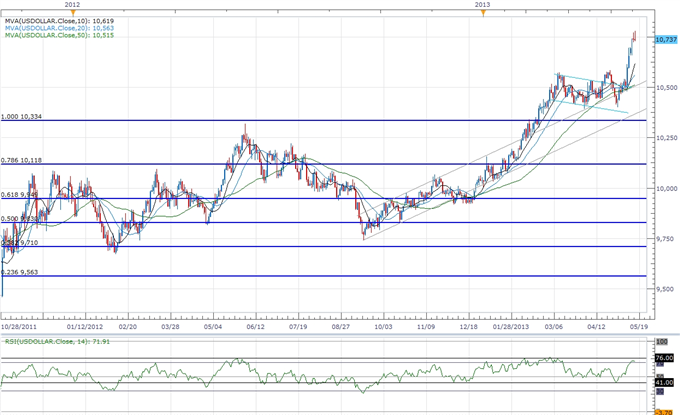 As Philadelphia Fed President Charles Plosser continued to float the idea of scaling back quantitative easing at the June 19 meeting, Dallas Fed President Richard Fisher followed suit and warned that the asset purchase program could be ‘potentially disruptive to the proper functioning of the MBS market,’ and went onto say that the committee should ‘dial back’ its non-standard measures as the economic recovery gradually gathers pace. Indeed, the shift in the policy outlook should carry the dollar higher over the coming months, but the index looks poised for a correction as the relative strength index falls back from a high of 72. In turn, we may see former resistance around the 10,600 figure come in as new support, and the bullish sentiment surrounding the reserve currency should gather pace throughout 2013 as the central bank faces limited scope to expand the balance sheet further.

The greenback weakened against three of the four components, led by a 0.36 percent rally in the British Pound, and the sterling may continue to track higher ahead of the Bank of England (BoE) Minutes due out on May 22 as the central bank strikes an improved outlook for the U.K. economy. Indeed, the policy statement may further dampen expectations for more quantitative easing as a growing number of BoE officials adopt a more neutral to hawkish tone for monetary policy, and it seems as though the Monetary Policy Committee will keep the Asset Purchase Facility capped at GBP 375B as they see a modest and sustainable recovery in Britain. As the GBPUSD carves out a higher low in May, the shift in the policy outlook may spark a more meaningful run at the 38.2 percent Fibonacci retracement from the 2009 low to high around 1.5680, and the British Pound may continue to recoup the losses from earlier this year as the BoE appears to be slowly moving away from its easing cycle.