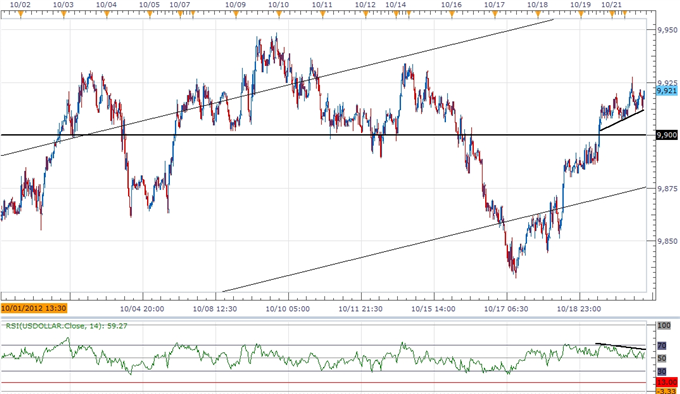 Although the Dow Jones-FXCM U.S. Dollar Index (Ticker: USDollar) remains 0.10 percent higher from the open, the greenback may continue to pare the advance carried over from the previous week as there appears to be a bearish divergence in the 30-minute relative strength index. As the oscillator continues to come off of overbought territory, we may see a larger correction in the index, but the bearish formation may fail to take shape should as the RSI appears to be finding interim support around the 50 figure. In turn, we may see the dollar continue to recoup the losses from earlier this month, and the index may make another run at 9,950 as the economic docket is expected to instill an improved outlook for the U.S. 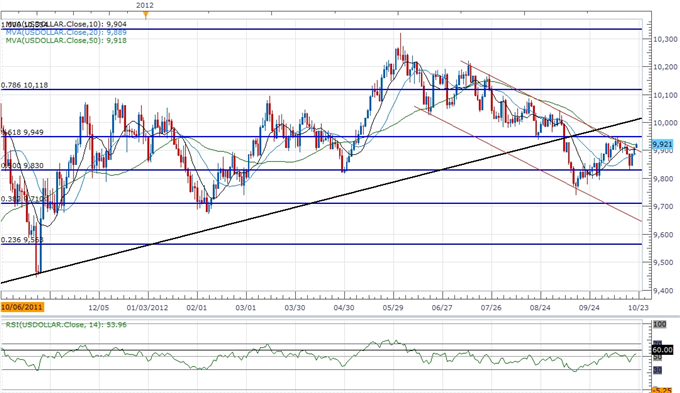 Although the USDOLLAR looks as though its breaking out of the downward trending channel from the end of July, we would like to see a close above the 50-Day SMA (9,918) to see the reversal from 9,740 gather pace. As the recent batch of fundamental developments coming out of the world’s largest economy instills an improved outlook for growth, we may see the FOMC soften its dovish tone for monetary policy, and Fed Chairman Ben Bernanke may see a narrowing case to push for more easing as the recovery gets on a more sustainable path. In turn the rate decision on tap for later this week generate a bullish reaction in the USD, and the greenback may track higher throughout the week as the preliminary 3Q GDP report is expected to show the growth rate expanding an annualized 1.9% versus the 1.3% rise during the three-months through June.

Two of the four components weakened against the greenback, led by a 0.70 percent decline in the Japanese Yen, and the low-yielding currency may face additional headwinds over the near-term as the weakening outlook for the world’s third-largest economy fuels bets for more easing. Indeed, the Bank of Japan lowered its growth forecast for the region as the recovery appears to have ‘paused,’ and the central bank may face increased pressure to intervene in the currency market amid the ongoing downturn in global trade, but we may see Governor Masaaki Shirakawa reply on quantitative easing to address the risks surrounding the region as its previous attempts to depreciate the local currency failed to have a lasting impact. As the RSI on the USDJPY pushes deeper into overbought territory, we should see the exchange rate continue to track higher, and we will look for a short-term correction once the oscillator falls back below 70.