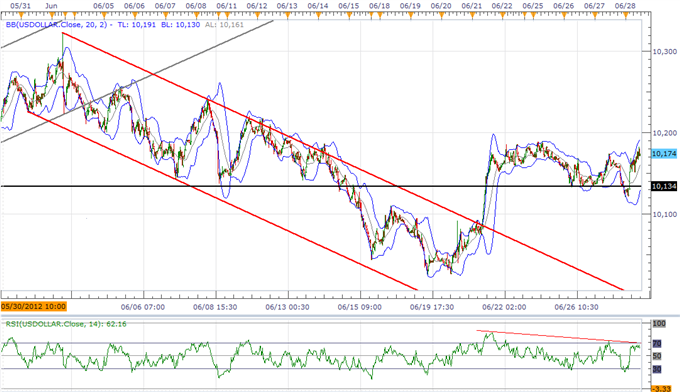 Although the Dow Jones-FXCM U.S. Dollar Index (Ticker: USDollar) is 0.13 percent higher on the day, the greenback may continue to trade within a narrow range over the next 24-hours of trading as the EU Summit takes center stage. Indeed, headlines coming out of the meeting is likely to spark increased volatility across the major currencies, and we may see the flight to safety gather pace should the group of European policy makers struggle to meet on common ground. In light of the recent developments, it seems as though the group is softening its push for further fiscal integration, and the new agenda to draw up a growth pact may do little to restore investor confidence as the group maintains a reactionary approach in addressing the threat for contagion. Nevertheless, we’re still watching the inverse head-and-shoulders reversal take shape, but we will be keeping a close eye on the 30-minute relative strength as there appears to be a bearish divergence in the oscillator. In turn, we need a move above the 10,200 figure for the bullish formation to pan out, but we will scale back our bet for more dollar advances should the index fail to hold above the October high (10,134). The longer-term picture for the dollar remains bullish as it maintains the upward trend from earlier this year, and the reserve currency may continue to push higher in the second-half of the year as the data coming out of the world’s largest economy limit’s the Fed’s scope to push through another asset purchase program. As the stickiness in underlying price growth heightens the threat for inflation, we should see the FOMC continue to soften its dovish tone for monetary policy, and the central bank may have little choice but to carry its current policy into 2013 as growth and inflation picks up. As the recovery gradually gathers pace, we should see the Fed move away from its easing cycle next year, and the shift in the policy outlook should increase the appeal of the USD as bets for QE3 dissipate. As the reserve currency carves out a higher low in June, we anticipate to see fresh yearly highs in the index, and we will be closely watching the relative strength index as it appears to be in an upward trend.

Once again, three of the four components weakened against the greenback, led by a 0.45 percent decline in the Australian dollar, while the Japanese Yen advanced 0.51 as currency traders scaled back their appetite for risk. Indeed, the USDJPY is threatening the ascending channel from earlier this month as the exchange rate struggles to hold above the 20-Day SMA (79.29), and we may see the pair come under increased pressure should the upward trend in the RSI give out. Nevertheless, our medium-term bias remains tilted to the upside as the Bank of Japan maintains its pledge to ease monetary policy further, and we may continue to see a series of higher highs paired with higher lows amid the disparity in the policy outlook.