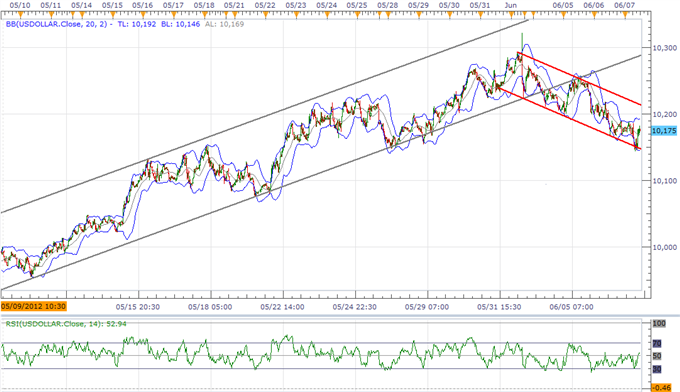 USD Outlook Propped Up By Bernanke, JPY Reversal To Accelerate

The Dow Jones-FXCM U.S. Dollar Index (Ticker: USDollar) is 0.05 percent higher from the open after moving 77 percent of its average true range, and the greenback may continue to recoup the losses from earlier this month as Fed Chairman Ben Bernanke softens his dovish tone for monetary policy. As the 30-minute relative strength index bounces back from a low of 31, we should see the dollar track higher going into the end of the week, but the upside for the reserve currency remains limited as the index appears be trading within a downward trending channel. Although the greenback remains poised for a correction, the shift in central bank rhetoric may produce fairly muted pullback in the USD, and we may see the reserve currency resume the advance from earlier this year as market participants scale back bets for another round of quantitative easing. 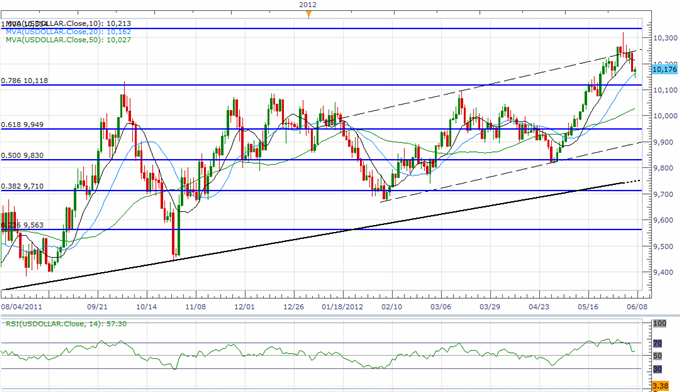 Although Fed Chairman Bernanke kept the door open to expand monetary policy further, the central bank head struck a fairly balanced tone while testifying in front of Congress, and we should see the FOMC preserve its wait-and-see approach throughout 2012 as the world’s largest economy gets on a more sustainable path. As a result, we maintain our medium-term bias for a stronger dollar, but the short-term correction may continue to pan out in the days ahead as the relative strength index continues to come off of overbought territory. As the dollar fails to hold above the 10-Day SMA (10,212) the pullback from 10,323 should continue to gather pace, but we are looking for a higher low in the index as it maintains the broad ascending triangle from earlier this year. In turn, we are looking for some soft support around the 78.6 percent Fibonacci retracement around 10,118, but it’s imperative for the 61.8 Fib (9,949) for the greenback to preserve the bullish trend.

Two of the four components weakened against the greenback, led by a 0.57 percent decline in the Japanese Yen, and the low-yielding currency may continue to give back the advance from the previous month as the Fed moves away from its easing cycle. Indeed, the USDJPY appears to have carved out a bottom coming into June as the pair breaks out of the downward trending channel from earlier this year, and the short-term reversal accelerate in the coming days as market participants see the Bank of Japan taking additional steps to stem the recent appreciation in the local currency. In turn, we should see the dollar-yen continue to retrace the sharp decline from March, and the pair may carve out fresh highs in the second-half of the year amid the deviation in the policy outlook.