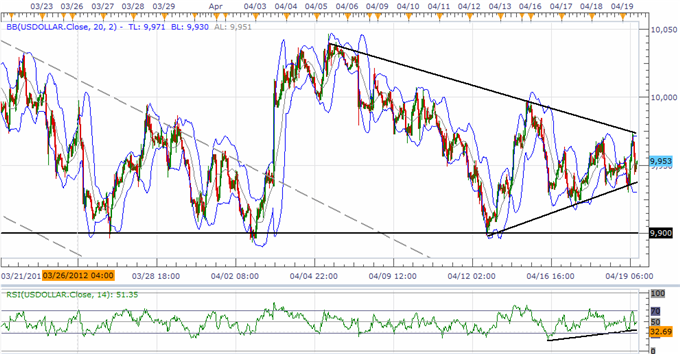 The Dow Jones-FXCM U.S. Dollar Index (Ticker: USDollar) remains 0.09 percent higher on the day after moving 76 percent of its average true range, but the recent pullback in the greenback is likely to be short-lived as an upward trend appears to be taking shape. At the same time, it looks as though the index is stuck within a continuation pattern, and the dollar looks poised for a sharp move to the upside as price action approaches the apex of the symmetrical triangle. In turn, we could see the dollar push back above 10,000 over the next 24-hours of trading, and we will stick with our bullish call for the USD as it maintains the upward trend from earlier this year. 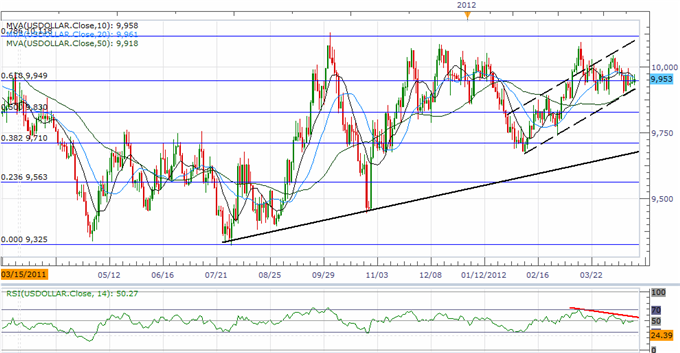 Despite the bullish signals on the 30-minute chart, we are keeping a close eye on the bearish divergence in the relatives strength index as the oscillator struggles to get back above 50. We would need to see the RSI break out of the bearish pattern to reinforce our bullish call for the dollar, but we will continue to look for a move higher in the greenback as U.S. policy makers continue to take note of the more robust recovery. As the Group of 20 meeting in Washington comes into focus, we may see world leaders increase their efforts to shore up global growth, and the developments coming out of the event could prop up market sentiment as the International Monetary Fund seeks to ramp up its lending capacity. However, as European policy makers struggle to address the threat for contagion, the international community may call for budget-cutting measures as the sovereign debt crisis continues to pose a risk to the world economy.

Two of the four components weakened against the reserve currency, led by a 0.33 percent decline in the Japanese Yen, and the low-yielding currency looks poised to weaken further in the coming days as the Bank of Japan pledges to expand monetary policy further. Indeed, BoJ Governor Masaaki Shirakawa reiterated that the central bank is ‘committed’ to its easing cycle, and we may see the central bank expand its asset purchase program at the next meeting on April 27 as it aims to meet the 1 percent target for inflation. In turn, it seems as though the short-term correction in the USDJPY is coming to an end, and we should see fresh yearly highs in the exchange rate as it carves out a higher low in April.