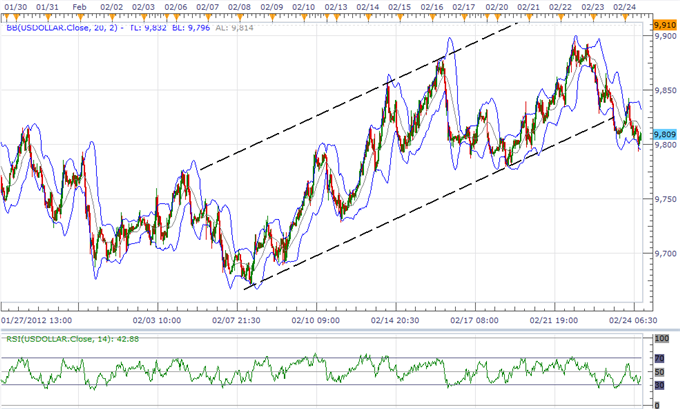 The Dow Jones-FXCM U.S. Dollar Index (Ticker: USDollar) is 0.10 percent lower on the day after moving 84 percent of its average true range, and the pullback from 9,896 may gather pace over the following week as the greenback appears to have carved out a near-term top heading into March. As market sentiment improves, we may see the rebound in risk-taking behavior continue to dampen the appeal of the USD, but the dollar should consolidate going into the end of the week as the 30-minute relative strength index bounces back from a low of 31. As Fed Chairman Ben Bernanke is scheduled to deliver the semi-annual monetary policy report to Congress next week, dovish comments from the central bank head may produce a sharp selloff in the USD, but we may see Mr. Bernanke strike an improved outlook for the world’s largest economy as the recovery picks up. 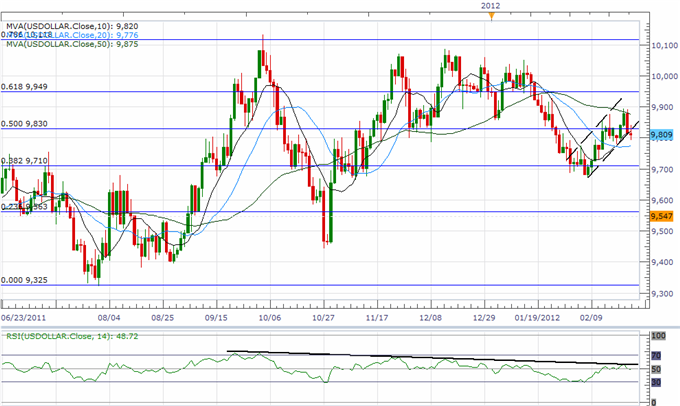 As the economic docket scheduled for the following week is expected to show a more robust recovery in the U.S., the Fed’s Beige Book may dampen speculation for more quantitative easing should the survey highlight an improved outlook for growth and inflation. In turn, we may see the USDOLLAR regain its footing going into March, but the technical outlook points to additional weakness for the dollar as the bearish divergence in the relative strength index continues to pan out. As the index quickly reverts back from the 50-Day SMA (9,875), we may see the index come up against the 38.2 percent Fibonacci retracement (9,710) to test for support, and the reserve currency may track sideways over the near-term as investors weigh the outlook for monetary policy.

Two of the four components weakened against the dollar, led by a 1.13 percent decline in the Japanese Yen, while the British Pound bucked the trend, advancing 0.76 percent from the open. As the Bank of England softens its dovish tone for monetary policy, easing bets for more QE has helped to prop up the GBP/USD, and we may see the sterling continue to retrace the decline from the previous year should the central bank look to conclude its easing cycle in 2012. However, as the pound-dollar remains capped by the 200-Day SMA (1.5910), the exchange rate may continue to track sideways over the near-term, but we may see a bullish breakout in the GBPUSD next week as the economic docket for the U.K. is expected to highlight a more robust recovery.