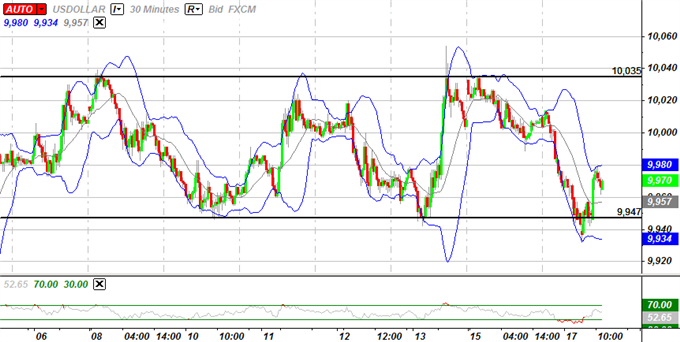 The Dow Jones-FXCM U.S. Dollar Index (Ticker: USDollar) remains 0.34 percent lower from the open after moving 125 percent of its average true range, but we should see the greenback recoup the losses from the overnight trade as the 30-minute relative strength index bounces back from a low of 19. As the USD maintains the narrow range from earlier this year, we may see the reserve currency work its way back towards 10,035, and the greenback may continue to track sideways over the near-term as market participants weigh the outlook for the world’s largest economy. However, as the dollar appears to be carving a higher low in January, the greenback could be setting up for another rally, and we anticipate to see additional USD strength over the near-term as the Fed continues to soften its dovish tone for monetary policy. 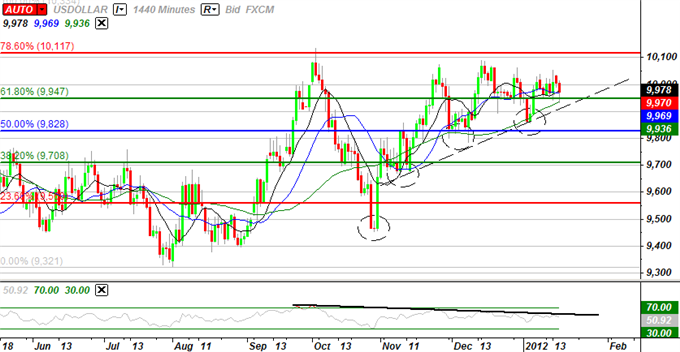 As price action climbs back above the 61.8 percent Fibonacci retracement around 9,947, a close higher would support our view for a stronger USD, and we may see a bullish breakout in the greenback as price action approaches the apex of the ascending triangle. As the economic docket for this week is expected to highlight an improved outlook for the world’s largest economy, the more robust recovery will continue to limit the Fed’s scope to implement another large-scale asset purchase program, and we should see central talk down speculation for additional monetary support as the region skirts a double-dip recession. In turn, we expect fundamentals to play a greater role in driving the USD this year, and the more robust recovery should prop up the reserve currency as the outlook for growth and inflation improves. However, as the bearish divergence in the RSI becomes more apparent, we will continue to keep a close eye on the oscillator, and we may flip our bias on the USD should the index make another run at the 50.0% Fib around 9,708.

Three of the four components rallied against the greenback, led by a 0.76 percent advance in the Australian dollar, but the fundamental outlook for the high-yielding currency remains bearish as market participants see the Reserve Bank of Australia ease monetary policy further in 2012. According to Credit Suisse overnight index swaps, investors see the central bank lowering the benchmark interest rate by at least 100bp over the next 12-months, and speculation for a slew of rate cut should drive the exchange rate lower as the central bank tries to combat the slowing recovery in the isle-nation. As the AUD/USD appears to have carved out a lower high this week, a close below the 200-Day SMA (1.0412) will reinforce our view for a move back towards the 38.2 Fib from the 2010 low to the 2001 high around 0.9930-50, and the high-yielding currency remains poised to face additional headwinds over the near-term as we expect the rebound in market sentiment to taper off.