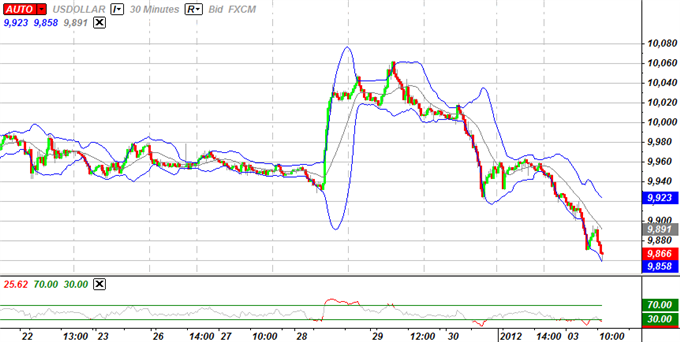 The Dow Jones-FXCM U.S. Dollar Index (Ticker: USDollar) is 0.87 percent lower from the open after moving 129 percent of its average true range, and the rise in market sentiment may gather pace over the next 24-hours of trading as the U.S. ISM Manufacturing report fuels risk taking behavior. As the developments coming out of the world’s largest economy props up investor confidence, the greenback may trade heavy over the remainder of the week, but we should see the USD consolidate overnight as the 30-minute relative strength index bounces back from a low of 15. Nevertheless, the FOMC minutes could spur a shift in market sentiment as we expect the central bank to soften its dovish tone for monetary policy, and the Fed may strike an improved outlook for the region as the economic recovery gradually gathers pace. 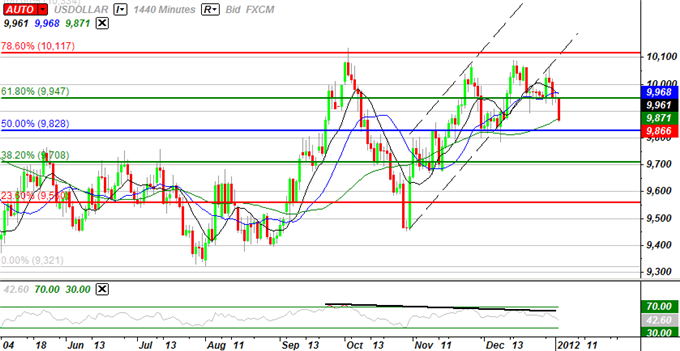 As we continue to monitor the bearish divergence in the relative strength index, we may see the index come up against the 50.0 percent Fibonacci retracement around 9,828 to test for support, but the Fed’s policy statement may instill a bullish bias for the USD should the central bank curb expectations for more quantitative easing. As central bank officials see a diminishing risk of a double-dip recession, the meeting minutes may curb expectations for QE3, and we may see the strong correlation between the USD and risk start to decouple as the Fed concludes its easing cycle. In turn, Chairman Ben Bernanke may endorse a wait-and-see approach for 2012, and the shift in the policy outlook could spur a sharp rebound in the dollar as market participants scale back bets for additional monetary support. Should the index hold above the 50.0 percent Fib, the consecutive higher lows should pave the way for dollar strength, and the USD may put in a higher high in January as the fundamental outlook for the reserve currency improves.

All four components rallied against the greenback on Tuesday, driven by a 1.36 percent advance in the Australian dollar, while the Euro pushed above the 20-Day SMA (1.3058) for the first time since December 9 after gaining 0.92 percent from the open. As the rebound in the EUR/USD threatens the downward trend carried over from the previous year, the exchange rate may consolidate with a broad range over the remainder of the week, but the single currency remains poised to face additional headwinds this year as the fundamental outlook for the region turns increasingly bleak. As European policy makers struggle to contain the sovereign debt crisis, the heightening threat of a euro-area breakup certainly dampens the appeal of the single currency, and the exchange rate may push lower over the near-term as the outlook for the region turns increasingly bleak. However, as the DailyFX Speculative Sentiment Index currently stands at -1.11, the shift in retail interest suggests that the bounce from 1.2857 will gather pace in the coming days, and the single currency may continue to retrace the sharp decline from the previous month the EU renews its effort to restore investor confidence.