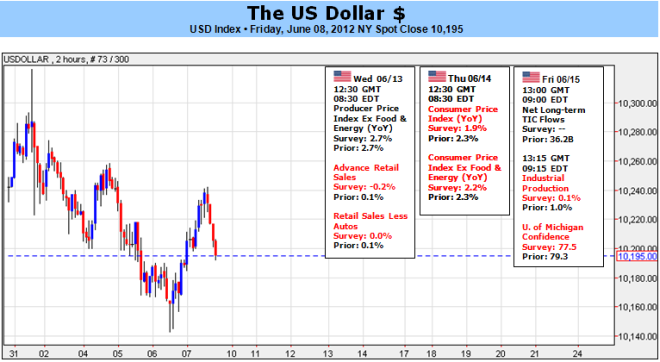 Dollar Pauses as Market Awaits Another Wave of Crisis or Stimulus

Dollar Pauses as Market Awaits Another Wave of Crisis or Stimulus

After five-week rally, the US dollar finally closed in the red this past week. Yet, looking at the fundamentals behind this capitulation, we are looking at a shift to consolidation rather than an immediate reversal. To dramatically turn the tables on the greenback, we must shift the fundamental bearings on sentiment – and that is exceptionally difficult to do given the underlying trends before us. From a big picture perspective, we have slowing growth, spreading financial tensions and fading yields. Basically, we are seeing lower rates of return against growing risks. This is not a mix that naturally spurs risk taking. What we need is a catalyst to tip the scales between risk and reward, and the coming week’s docket may not carry the necessary weight to tear attention away from the future Fed rate decision.

When there is a heavy piece of event risk in the foreseeable future – one that can dramatically alter the landscape of the markets – investors are oftentimes encouraged to stick to the sidelines rather than take risk on meaningful risk and find themselves on the wrong side of a momentous trend change. A common example I use is the lead up to the monthly NFPs release. Though the employment data is not guaranteed to rouse a new trend, the markets typically retrench in the preceding 24-48 hours of the release to respect the volatility that could results.

In the week after next, we have a dramatic round of extremely important events penciled into the calendar. Rather than look at basic risk versus reward, we are now looking at revived financial crisis versus hope for stimulus (inherently a troubled and temporary equilibrium, but that is a topic for another time). And, to that point, much larger seismic events are required to tap such deep wells. Beyond the upcoming week, we have big-ticket items like the second Greek election, the G-20 meeting, the EU Summit and the Fed’s rate decision (equipped with updated growth, inflation and interest rate forecasts). Each of these could carry the day on extreme fear (financial situation is melting down and/or no stimulus is coming) or an opportunity for speculators to jump in on depressed buying opportunities (crisis is averted and/or heavy-handed central bank investment is coming down the line).

Between this end of this past week and that imperious wave of fundamental risk, we have meaningful event risk but perhaps not the level of fodder that can distract the masses from their longer-term view. The immediate first line of interest is the rumored meeting between Spain and European officials. The Budget Minister already called for external support of the country’s troubled banking system, but they are expected to make it official. The bounce from equities and the euro (and subsequent slide from the dollar) into the end of the week reflects expectations that this will go through without hitch. As such, if it is denied (perhaps in a dispute over a full bailout and one just for the banking sector) or comes in smaller than what the market deems is necessary, we could find an early swell in fear that dominates the first half of the week. Alternatively, the Euro Zone’s troubles run deep, so stabilizing Spain may not rouse much confidence with Greece ahead.

Through the rest of the week, we should keep tabs on the ebb and flow of risk trends. We can monitor that specifically through the performance of the dollar (an extreme safe haven through its liquidity properties), the S&P 500 (particularly adept at playing to stimulus hopes) and the general strength of correlations across the different markets (it takes a heavy wind to sync such dramatically different assets). From the Dollar’s docket, we have a number of central bank speeches penciled in; but they won’t carry much weight before the Fed rate decision. As for data, the retail sales and CPI data will speak to the growth and inflation balance they look to strike, but we won’t be turning the titanic this late in the game. We should keep an eye on the TIC data though to measure USD safety demand. –JK