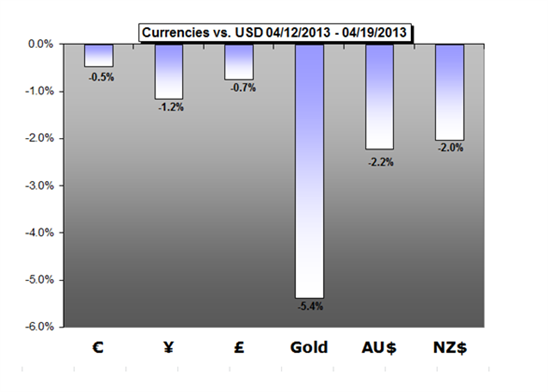 US Dollar on Cusp of Bullish Trend Revival, Focus on S&P 500 and GDP

We have been here multiple times over the past weeks and months. Conditions align for a market-wide shift in risk appetite that could catalyze the dollar higher, yet the spark that can set everything in motion remains elusive.

The Euro closed the week on a sour note as the Italian political climate unraveled further, ratcheting up uncertainty about the future of the Euro-zone's third largest economy. Will weak PMI data complement the negativity? Or will commentary from key core officials keep a soft bid under the Euro?

The Japanese Yen finally showed signs of life as it rallied strongly against the US Dollar and other major counterparts, but lack of action from a highly-anticipated G20 meeting gave traders the “green light” to continue selling into JPY weakness.

British Pound to Benefit From 1Q GDP as U.K. Returns to Growth

The British Pound struggled to hold its ground as Fitch Ratings lowered the U.K.’s AAA credit rating to AA+, and the GBPUSD may continue to give back the rebound from 1.4830 should it fail to maintain the upward trending channel carried over from the previous month.

Gold Sell-off Gets a Reprieve, but Damage is Done- 2011 Low on Tap

The gold sell-off continued early this week with the precious metal plummeting more than 5.8% by the close of trade on Friday.

New Zealand Dollar to Hold Range Ahead of RBNZ