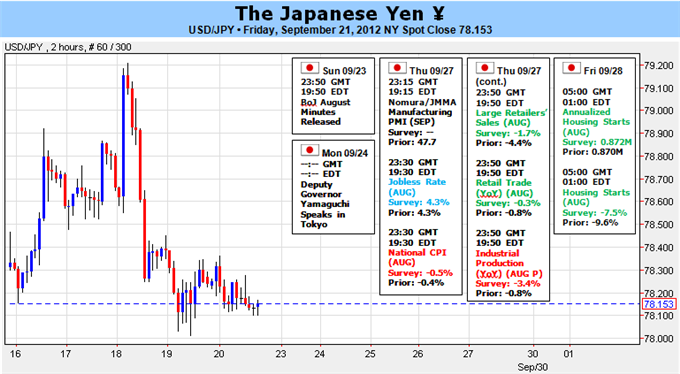 Japanese Yen Unfazed By BoJ Easing- Eyes 77.00 Ahead Of October

The Japanese Yen gained ground against its U.S. counterpart even as the Bank of Japan eased monetary policy at the September meeting, and USDJPY may continue to give back the rebound from 77.12 as positive real interest rates in the world’s third-largest economy increases the appeal of the Yen. Indeed, the BoJ surprised the market as the central bank voted unanimously to expand its asset-purchase program by JPY 10B to JPY 55B, and it seems as though the board will continue to embark on its easing cycle as it aims to achieve the 1% target for inflation.

Although the BoJ kept its government debt-buying program (Rinban) at JPY 1.8B, the central bank noted that it would remove the minimum bid yield for its bond purchases, and the move appears to be fueling speculation for negative interest rates as Governor Masaaki Shirakawa continues to rely on the non-standard measure to shore up the ailing economy. As the BoJ sees economic activity coming to a ‘pause,’ we anticipate the central bank to carry its easing cycle into the following year, and Governor Shirakawa may come under increased pressure to stem the persistent strength in the local currency as government officials continue to look for an export-led recovery. At the same time, the International Monetary Fund warned that it will lower the global growth ‘by a few decimal points’ amid the slowdown in the world economy, and the economic docket for the following week may continue to highlight the threat for deflation as the National Consumer Price Index is expected to weaken further in August.

As the outlook for growth and inflation deteriorates, the BoJ should continue to strike a very dovish tone for monetary, but we may see the Yen continue to gain ground against its major counterparts amid positive real interest rates in Japan. In turn, we may see renewed bets for a currency intervention as the exchange rate appears to be making another run at the 77.00 figure, and the dollar-yen may set a fresh monthly low going into the end of September should currency traders continue to scale back their appetite for risk. - DS