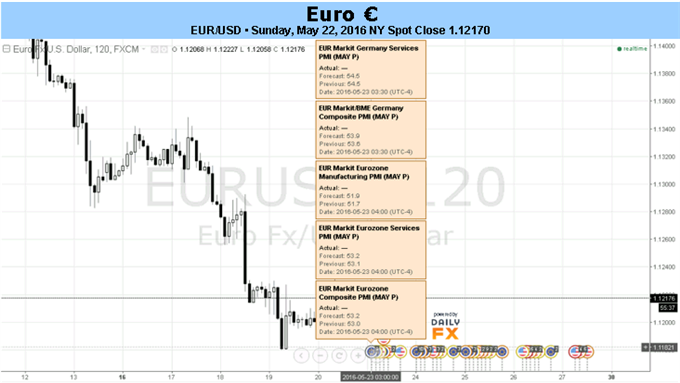 The Euro fell back against the British Pound (EUR/GBP -1.62%) and the US Dollar (EUR/USD -0.91%) last week while gaining broadly elsewhere. Current market trends seem likely to continue going forward as both the British Pound’s and the US Dollar’s catalysts – the probability of a ‘Brexit’ falling in recent polls and the market pulling forward Fed rate hike expectations, respectively – remain two of the strongest forces across global markets.

With the upcoming slate of Euro-Zone economic data set to show growth conditions improving, don’t be surprised if you see more of the same from the Euro over the coming week – potential for EUR/GBP and EUR/USD weakness (positioning certainly isn’t in the way), while other EUR-crosses could stay elevated. While there are no “high” rated events on the DailyFX Economic Calendar for the coming week for the Euro, there are almost twenty “medium” ranked events that bear enough significance to drive price action across the EUR-crosses.

All sets of preliminary May Euro-Zone and German PMI figures are expected to show improvement on Monday (as diffusion indexes, the further they rise above 50, the greater the pace of economic expansion is suggested). Both the German ZEW Survey for May due on Tuesday and the German IFO report for May due on Wednesday are forecast to show an improving economic picture in the Euro-Zone’s largest economy.

In total, the forecasts for Euro-Zone and German data over the coming week are indicative of a steadily improving growth backdrop, one in which the ECB may find some solace at present time as it continues to monitor the progress of its recent easing upgrades, which were admittedly not aimed at the FX channel (and thus gave the breathing room for the Euro to rally).

Any improvement in Euro-Zone economic data that suggests the ECB should remain patient should be supportive of the Euro. Alongside the improvement in recent data, EONIA markets are pricing in less than 5-bps of rate cuts by December. In other terms, this means that overnight index swaps markets are pricing in less than a 40% chance of cuts to the deposit and main refinancing rates. Before the Euro declines again, both EONIA and OIS rates will need to turn around. Until then,but for the recent sharp shifts in expectations around a Brexit and a Fed rate hike in June, the Euro seems due for more of the same. –CV