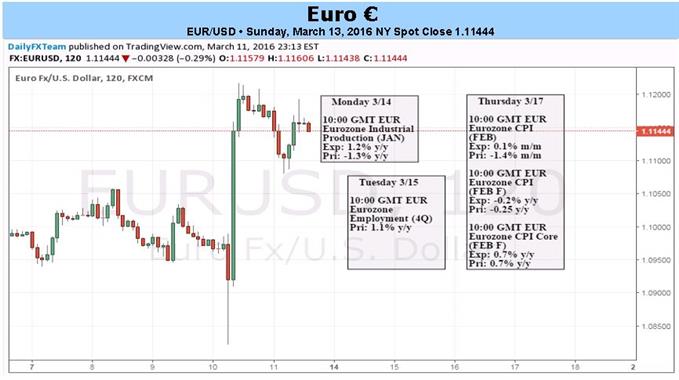 - When the ECB fired its bazooka, it met and exceeded our heightened expectations.

After an odd week in FX markets thanks to varying degrees of surprise brought forth by central banks (particularly the Reserve Bank of New Zealand and the European Central Bank), the Euro managed to find itself near the top of the pile, outperforming all but one of the major currencies (EUR/AUD -0.32%) over the past five days. Yet FX markets weren’t fully tilted in the ‘risk-on’ direction: EUR/CAD settled higher by +0.55%; EUR/NZD was the best performing EUR-cross, up by +2.25%.

As we gleaned from the ECB’s surprisingly aggressive policy decisions and press conference on Thursday, traders may find some confusion as to what extent the new stimulus measures will impact the Euro. Here, we’ll try to make sense of it all.

If you read between the lines of the ECB minutes and ECB President Mario Draghi’s press conferences since January, there has been a growing belief that the ECB’s policies are having less of an impact on the FX channel – the Euro’s exchange rate, broadly speaking. First, we’ll look at the ECB’s January meeting minutes, then we’ll see what was done this past week.

In the ECB’s January meeting minutes, when discussing the importance of the FX channel on Euro-Zone growth and inflation, the minutes revealed that policymakers believed that “this channel had weakened owning in particular to the depreciation of the currencies of emerging market economies.” In essence, the strong US Dollar had already depressed commodity prices and their adjunct currencies to the point that a weaker Euro relatively speaking would result in little material improvement in growth and/or inflation conditions.

Now let’s look at what the ECB actually did. Superficially, it looked bad for the Euro that the ECB lowered rates further into negative territory. But as surmised in the immediate reaction after the ECB’s press conference began and their intentions fully revealed, it was clear that the ECB wasn’t lowering rates into negative territory as a way to deter investors from piling into the Euro. Rather, when taken in conjunction with the new, unexpected four-year TLTRO program, it’s clear that the ECB is targeting credit rather than FX.

By lowering their rate floor to -0.40% and introducing the TLTROs at the same time, the ECB is incentivizing banks to lend: the more they lend out, the more the more favorable terms the banks receive. A key passage from the ECB’s TLTRO press release: “…counterparties whose eligible net lending [between February 1, 2016 and January 31, 2018] exceeds their benchmark will be charged a lower rate for the entire term of the operation…Counterparties will receive the maximum rate reduction equal to the difference between the MRO rate and the rate on the deposit facility applicable at the time of take-up…” In some cases, if banks greatly exceed their benchmarks for loans, they could essentially get paid by the ECB to borrow money – from the ECB. This sounds like a good deal: for the banks to lend at increasingly favorable rates; and for the real economy, which will have easier access to credit.

Whether or not these measures actually work is another story entirely, but they don’t seem likely to impact the Euro directly. However, they could impact the Euro indirectly to varying degrees in the short-term and the long-term.

In the short-term, by greasing credit channels via the banks and targeting non-corporate bonds under their tweaked asset purchase program, the ECB is reducing credit risk across the board – including for the overly involved sovereigns keeping this codependent system alive. Sovereign credit default swaps continued their recent contraction (especially in the periphery) in the aftermath of the ECB’s meeting (chart 1 below). 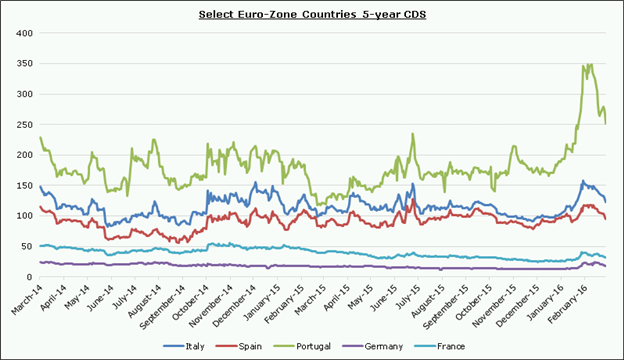 As we wrote on Friday, how the Euro could be hurt by the ECB’s measures is through the portfolio rebalancing channel. This effect, something that we've seen impact asset prices on and off over the past few years (thanks to QE), dictates that in a falling yield environment (rates in Europe are going further negative - check), investors will be forced to take on greater risk to achieve similar levels of return. If investors outside of the Euro-Zone want to take advantage of falling credit risk and potentially buoyed higher equity markets in Europe, they have to exchange their local currencies for Euros. 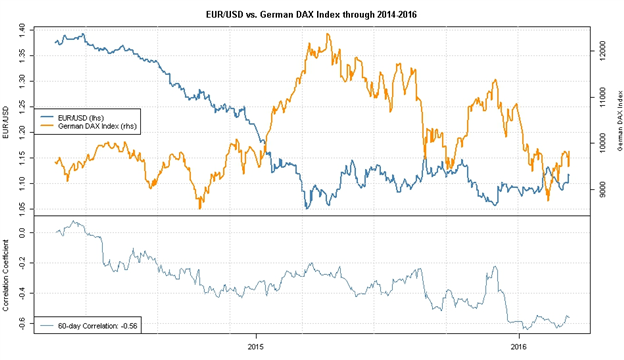 Currently, the 20-day correlationbetween EUR/USD and the German DAX is -0.55 while the 60-day correlation -0.56. This is where the Euro could be impacted: as investors take on EUR-denominated assets onto their balance sheet/into the portfolio (by buying the German DAX), they will need to short the Euro in the spot or forward market in order to limit exchange rate risk. In this case, higher equities - a stronger German DAX, for example - would be bad for the Euro. In context of the current environment, this means pushing the Euro lower will be harder; in the event of a ‘risk-off’ environment, the Euro may be prone to gain more rapidly.

Over the long-term, if these measures work, growth and inflation should pick up, and in turn, reduce the need for the ECB to take further extensive efforts (though, given the new measures, core countries yield curves should flatten further as negative rates spread across the curve; this may force them to change the confines of the QE program again to expand the collateral eligible for purchase).

For now, the ECB has figured out a way to experiment with NIRP without directly targeting the Euro. Barring a ‘Brexit’ – which would represent a step down the “worst case scenario” path in an existential crisis for the European Union – traders may find the Euro has gained a little bit of breathing room going forward. –CV