Coming into Q1’16, our main theme for EUR/USD was that, because market participants would be wholly fixated on seeing what the European Central Bank and the Federal Reserve would do in their March meetings, neutrality would prevail. Indeed, with price ranging between $1.0710 and $1.1376 over Q1’16, we believe the sideways trading environment anticipated did indeed play out. With that said, we’re reiterating our belief that, due to the lack of a clear divergence in monetary policies coupled with a vague technical backdrop, EUR/USD is due for more sideways trading.

While there may have been passive expectations for the ECB and the Fed to step up their stimulus offerings at some point in Q1’16, the steps taken in March by both central banks were deemed surprising by markets. Consider that the ECB’s March easing efforts weren’t aimed at FX rates, and the Fed’s hold eliminated two rate hikes from their ‘dot plot’ in 2016. Even though the ECB unveiled measures to ease credit channels and thus, make policy more dovish at the margin, the explicit rate divergence trade had seemingly taken a backseat thus far in 2016 without a Fed rate hike year to date.

Granted, in Q2’16, it seems unlikely that both central banks move – and if one is to move at all, it’s going to be the Fed. In that regard, it seems the Fed is trying to shape expectations for an April or a June rate hike; although the Fed, like the ECB and so many other central banks, has fallen into the predictable pattern of only making significant decisions when armed with changes to their staff policy forecasts in hand. We surmise that the Fed won’t want to raise rates without Chair Janet Yellen being able to defend the decision at a press conference, so June seems the most likely period.

For the ECB, there are a few factors in play. For starters, we can’t dismiss that ECB President Mario Draghi made clear that he along with other members of the ECB Governing Council believe that the FX channel has become less receptive to ECB easing measures. While EUR/USD is hovering the ECB’s 2016 technically-assumed level of $1.0900, it appears that the ECB will be willing to tolerate a stronger exchange rate so long as it doesn’t interfere with inflation pressures picking back up.

There’s also something to be said about the voting composition at the ECB meeting in March, and why that means the ECB won’t ease again this quarter. Jens Weidmann, the notorious German policy hawk who heads up the Bundesbank, did not vote at the ECB’s March meeting due to the recently instituted rule of rotating voting members. Call us conspiracy theorists, but given Mr. Weidmann’s public admonishments for the ECB’s March actions, we’re led to believe that his presence during future votes means the threshold to ease further will have to be higher.

What may be the biggest risk to the Euro in Q2’16? The EU-UK referendum on June 23 (and the extremist innuendo that’s led to the referendum in the first place). Based on the media reaction, the particular mechanisms of the voting process and events thereafter aren’t well-known, which has led to heightened volatility in markets. Let’s be honest – the likely economic and political outcomes for the UK are not all that enticing to discuss because they don’t pander to people’s insecurities and fears.

If markets are overreacting regarding the British Pound, they’ve underestimated this event in terms of the existential implications it has for the Euro by a very wide margin. The whole premise of the European Union project, going back to its humble beginnings rising from the ashes of World War II as the European Coal and Steel Community, was to promote an economic vision of a unified Europe where, regardless of the language you spoke, the country you lived in, or culture you partook in, you were a European at heart. When we fast forward to present day, the implications of a Brexit at a time when (1) a crippling debt crisis has sapped sovereignty from peripheral European countries, (2) the Syrian Civil War has produced an uncontrollable wave of refugees that has revealed infrastructure issues and (3) considerable security concerns to the point that countries have threatened to renege on their Schengen Area duties to close their borders.

The Euro is having a “political moment” right now. The very heart and soul of Europe is at stake from a litany of perspectives. This may be a disagreeable statement, so we defer to German philosopher Arthur Schopenhauer: “All truth passes through three stages. First, it is ridiculed. Second, it is violently opposed. Third, it is accepted as being self-evident.” If the world wakes up June 24 and the UK has voted to leave the EU, the Euro will have some difficult truths to deal with indeed. 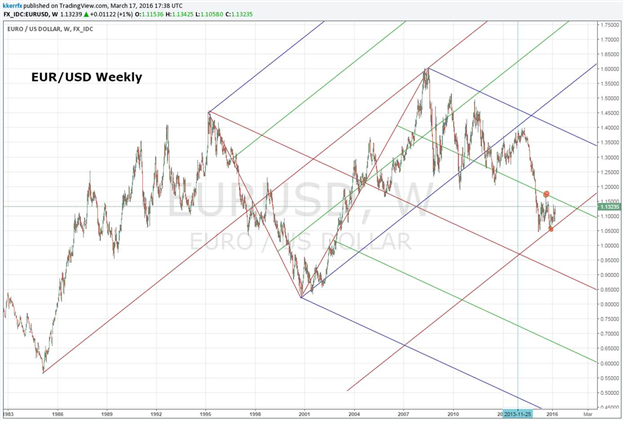 The Euro has been hemmed in by some by some important long-term levels over the past couple of quarters. First, in August, on the upside by the internal parallel of an Andrews’ Pitchfork drawn from the 1995 (synthetic) EUR/USD high through the 2000 record traded low and the 2008 record traded high.

Following this failure, EUR/USD traded down in December to an external parallel of an Andrews’ Pitchfork drawn from the (synthetic) 1985 Plaza Accord low through the 1995 high and the 2000 low. It is also worth pointing out that the median line of that same structure coincided almost perfectly with the all-time traded high in EUR/USD in 2008.

From this external parallel the exchange rate has recovered sharply and we now really need to see that level (currently just under $1.0700) convincingly broken to get excited about the prospects of another important leg lower materializing in the exchange rate. The same goes for the topside and the internal parallel around $1.1600. Below it, the Euro remains in “no man’s land”, above it and we can start talking about the start of a much more important counter-trend move. The first part of June looks important for the Euro from a timing perspective – we can’t ignore the coincidence that the EU-UK referendum would be just around the corner.