Euro Burdened By Prospect of ECB Action in March - Is it a Real Threat? 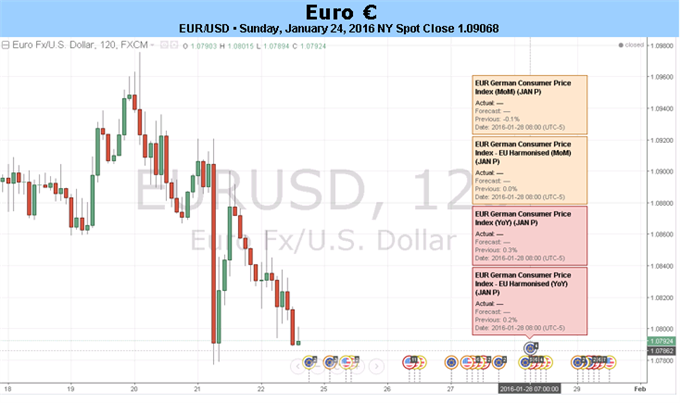 - The ECB did as was widely expected and hinted at possible policy action in March.

- Retail traders flipped positioning in EUR/USD only after the pair dropped following the ECB meeting.

- Risk management is paramount to long-term profitability in trading – see what principles you should embody in the “Traits of Successful Traders” series.

With equity markets turning around sharply by the end of the week – thereby removing a key source of strength for the Euro thus far in 2016 – the Euro fell broadly across the board. EUR/JPY’s performance was revealing in this regard, having gained +0.58%, only one of the two major EUR-crosses to post gains on the week (EUR/CHF was the other, up +0.34%). Indeed, with the European Central Bank’s policy meeting on Thursday being the source of optimism for markets globally, it’s not much of a surprise that the threat of policy action in March – particularly at a time when the news cycle is so negative and market participants are starved of monetary policy stimulus from central banks in advanced economies – sunk the Euro more broadly elsewhere.

The Euro’s reaction across the board is telling: sentiment is extremely fragile and prone to exacerbate price swings across asset classes. However, it wasn’t nearly as significant in terms of the magnitude of the decline relative to what happened after the ECB’s meeting in October 2015. Thus, there is one question which we seek to answer: do markets take the ECB’s hint for more stimulus in March as a credible threat?

At first blush, “yes” may seem like the logical answer. After all, the Euro posted its first losing week across the board for the first time all year, and global equity markets stabilized – if violently – after several days of tumultuous trading. Of course, then, with so much optimism having sprung henceforth, traders must feel that the ECB’s threat of upgrading its stimulus outlets is legitimate.

Yet when we try to answer this question from the ECB’s perspective, the answer may in fact be “no.” As we’ve touched on in recent weeks, the ECB, like so many other central banks in advanced economies, has fallen into the predictable pattern of only altering policy when it has new economic forecasts in hand. This of course is a symptom of the global shift to more transparency in central banks’ activities, which in turn may be having a chilling effect on these institutions’ abilities to change policies quickly. By changing policy without a change in economic forecasts, central banks would otherwise expose markets to greater uncertainty as market participants inevitably ask themselves, ‘what do the central banks know that we don’t?’

If this is true, then the ECB had to keep policy action on the table for the March meeting, as without that option, markets would quickly embrace the view that the ECB wouldn’t be doing much if anything until June 2016, the next time the economic forecasts would be updated. Against the backdrop of global markets becoming unhinged and volatility rising across asset classes, any sign that one of the major central banks was closing off the option to more stimulus in the near-term would be a death-knell to risk assets in the near-term, and likewise, more than likely send the Euro skyrocketing across the board. In effect, the ECB really had no choice but to suggest that March could be the next time more easing is introduced.

Market participants are keenly aware of this psychological feedback loop central banks have conditioned us and themselves to, and as such, may only be treating President Mario Draghi’s otherwise soothing commentary as something to take with a grain of salt, which is why the Euro hasn’t experienced the same magnitude of declines it has around past meetings rife with promises. Similarly, traders’ positioning ahead of the meeting may have helped insulate the Euro from the kind of steep losses that materialized after the October 2015 meeting. Ahead of the October meeting, there were only 62.6K net-short contracts held by speculators in the futures market; this week, there were 137.0K net-shorts. Put simply, the market is already fairly saturated with short positions, and there weren’t enough participants otherwise not yet engaged willing to come in and drive lower in the same manner.

Truly, traders may be waiting to see what form ECB action could take in March before committing to another leg lower in the EUR-crosses. In terms of what the ECB could do in March, the two main options appear to be tweaking the QE program or cutting the deposit rate once more. For the first path, it’s important to remember that the current QE program (the expanded asset purchase program (APP)) is only partly implemented at this point, with approximately €620 billion of purchases, or about 41.3%, of the €1.5 trillion expansion having been completed.

If the ECB were to announce some form of enhancement to the QE program, it would likely be one of: an increase in the program’s duration (from March 2017 to September 2017 or beyond, which would raise the APP by at least €360 billion at its current run-rate of €60 billion per month); an increase in the run-rate of asset purchases (from €60 billion to €80 billion per month), and/or an expanded universe for accepted collateral (targeting lower quality assets or different types, like corporate). 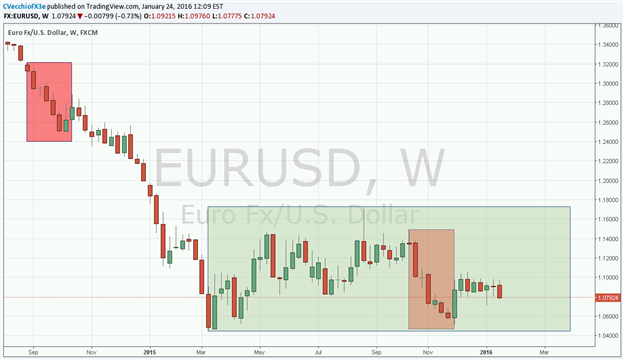 If the ECB’s goal is to keep the Euro lower, then it will probably choose the second option of cutting the deposit rate again, which should be enough to entice new shorts to enter the market. As the chart above shows, the periods around the initial deposit rate cut announcements (actual or intended implementation) (red boxes) have produced more elicit negative reactions than the general implementation of the APP since March 2015 (green box). Since the QE program was implemented in March 2015, EUR/USD has rallied by a shade over +1%. However, the threats and/or implementations of a deposit rate cut have proved far more effective for weakening the Euro: both the September 2014 surprise deposit rate cut and the October 2015 surprise announcement of a forthcoming deposit rate cut in December 2015 saw EUR/USD kickoff stretches in which it closed lower at least four of the next six weeks.

It seems that the implementation of more QE may help reduce the possibility a large rebound in the EUR-crosses; but only a deposit rate cut will push the EUR-crosses lower. Between now and the March meeting, traders should be squarely focusing on energy markets, for continued falling commodity prices represent the best reason the ECB has to loosen policy further. 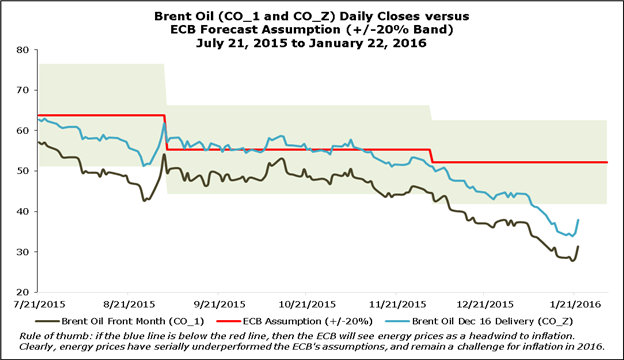 One of the biggest factors in determining whether or not the ECB will act in March will be the price of Brent Oil, the input the ECB bases its inflation forecasts around. As it stands, developments in energy markets give the ECB’s threat of action in March the little credibility that it has. Brent Oil is forecast at $52.20 per barrel for 2016. Depending upon how you measure it, energy prices are underperforming the ECB’s forecast in the neighborhood of –27% (December 2016 futures contract close on Friday) to -40% (generic front month close on Friday). While EUR/USD isn’t much of a concern at the present moment (having closed the week at $1.0792, below the ECB’s assumed level for 2016 of $1.0900), it’s easy to envision a scenario where, if energy prices remain under pressure and the Euro rallies once more if risk aversion intensifies, the ECB does indeed act again in March.

In the week ahead, there are only two data sets that will carry weight in the ECB’s decision making moving forward: the German and Euro-Zone Consumer Price Indexes released on Thursday and Friday, respectively. These preliminary reports for January will likely show further pressure on the inflation front, thanks to declining energy prices in the near-term and the resulting base effects (this will likely be the case for all of 2016). All things considered, traders will probably show more sensitivity to these two reports than any other Euro-related economic data this week.

These observations lead us to the conclusion that the ECB, much like the Federal Reserve is in when it meets in March, is in a bind. As one of many central banks that have fallen into a predictable pattern of changing policy only when forecasts change, the ECB’s meeting in March with be one filled with consternation. The ECB may be more or less forced to cut its deposit rate again if it wants to keep the Euro pinned lower. Otherwise, even the simple promise of expanded QE operations may not be enough to satisfy stimulus-starved market participants. Anything short of another deposit rate cut, or at least a more explicit promise of one down the line, seems destined to provide some levity to the Euro.

Going forward, as it pertains directly to the Euro, rather than a symptom of the global erosion in risk sentiment, traders may want to keep an eye on EUR/SEK. Earlier this January, the Riksbank codified its intention to intervene in FX markets. If you’re unfamiliar or want more background information, you may find the article “Riksbank Intervention Threat Aims to Lift EUR/SEK Prices” helpful, especially a week after EUR/SEK erased around half of its gains for the month.