- ECB unlikely to act at back-to-back meetings without change in staff projections.

For the Euro, the appeal it has in the current environment in the short-term may ultimately be countered by the European Central Bank over a longer-term period, thanks to the overarching thematic influence of the central bank's ultra-loose monetary policy. Heading into the meeting, market observers have hastened their calls for more ECB easing, in part due to the ongoing slide in energy prices. 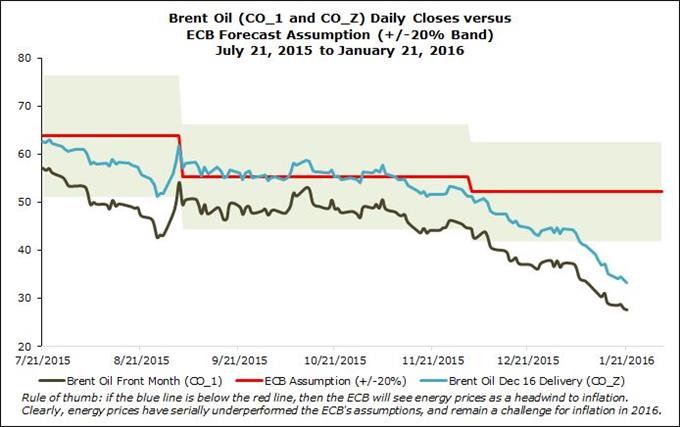 Brent Oil, the energy input the ECB bases their inflation forecasts around, is forecast at $52.20 per barrel for 2016. Depending upon how you measure it, energy prices are underperforming the ECB’s forecast in the neighborhood of –36% (December 2016 contract, CO_Z) to -47% (generic front month, CO_1). This is a material headwind that is more than just 'transitory' - and it's a valid excuse for the ECB to do more.

Nevertheless, it appears rather unlikely that the ECB will act again today. The ECB typically allows a period of time to pass between policy enhancements, so as to be able to measure the impact of prior policies. The deposit rate cut was just made in December, and there is still a long way to go under the ECB’s current QE program (though the goal posts could easily be changed again over the coming months). The expanded asset purchase program (APP) is only partly implemented at this point, with approximately €600 billion of purchases, or about 40% of the €1.5 trillion expansion.

Perhaps more importantly, the ECB is one of many central banks have fallen into a predictable pattern of when policy action is most likely to arrive: only when forecasts are updated. Thus, the risks to the ECB’s inflation forecast should have President Draghi and the Governing Council keeping markets focused on March, when the ECB will update its forecasts for 2016 and beyond. 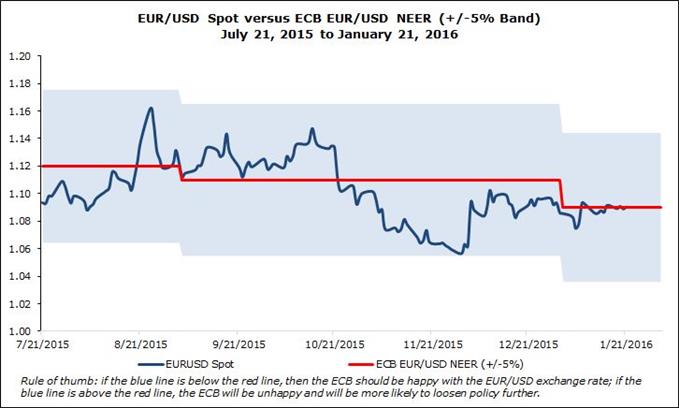 For now, EUR/USD isn't much of an issue for the ECB. However, if gains develop between now and March, in context of the EUR TWI having already gained over +2% this year, the ECB will likely find it to be a significant obstacle in their objective to achieve price growth of +2% over the medium-term.

We think there is a pretty fair argument for both Euro gains and losses over the coming weeks, with the short-term bullishness (risk-off nature of markets) ultimately balanced out by the medium-term bearishness (the ECB’s ongoing efforts via QE and low rates). Keeping this relationship in check, if the Euro strengthens materially over the coming weeks, in context of how poor energy prices are performing with respect to the ECB’s forecasts, it would likely raise the likelihood that the ECB acts in March to expand their QE program or cut their deposit rate again. Today, however, neither seems likely, which means that President Draghi's press conference - particularly the Q&A portion - will carry additional weight as traders search for clues on the next move.

Join me at 12:30 GMT today for live coverage of the ECB rate decision.