As was largely expected, the European Central Bank kept its key interest rates on hold at their prior levels, but it was President Mario Draghi’s press conference that proved to be a meaningful sparkplug in the EUR-crosses. Ultimately, seeing that the ECB chose to stand pat at this meeting isn't really a surprise. Central banks have fallen into sort of a rut recently, where in the attempt to be as transparent in their dealings as possible, they have conditioned market participants to only expect significant changes to policy when changes to economic forecasts are in hand.

Just as the ECB did in October 2015, President Draghi opened the press conference by highlighting concerns over emerging market growth, financial market volatility, and falling short-term inflation expectations (thanks to sustained low energy prices and a stronger EUR TWI during the start of the year). The end result was the same, too: the ECB stood ready to act again should market conditions deteriorate further, which would be reflected in updated staff economic forecasts.

It seems like the market is experiencing a mini-October 2015 redux: EUR/USD has dropped quickly amid hints of more action in March, just as it did heading into the December 2015 meeting. The ECB could bring forth substantive policy changes like a change in the QE program or cutting its deposit rate once more. Besides lower rates further, changes in the QE program could come along the lines of: changing its duration past its March 2017 2016 expiration; a change in the program's scope (what bonds can be purchased); and/or a change in the size (the run-rate of purchases, currently at €60 billion/month). 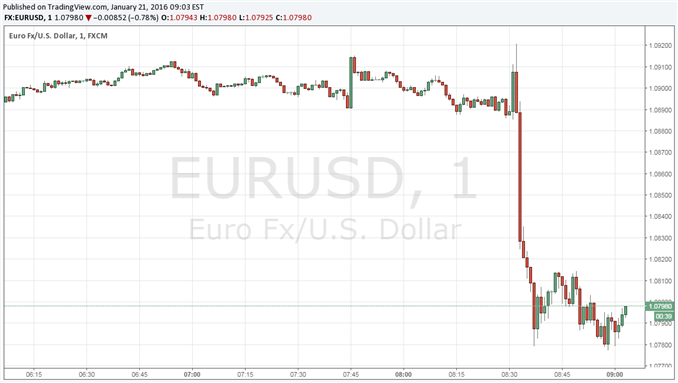 EUR/USD had been trading in a narrow range after the rate decision and ahead of the press conference. However, as soon as the press conference started, EUR/USD quickly dropped from a high of $1.0921 to as low as $1.0780; at the time this report was written, the pair was trading at $1.0798.