- Riksbank has been threatening intervention for the past several months.

- Ability to intervene was codified on Monday with this release.

- EUR/SEK move below 9.1000 would greatly raise odds of immediate intervention.

The Decision: Time to Intervene

The Swedish Riksbank is in a tough situation. Inflation has been steadily moving towards the central bank’s target, but a rapidly rising Swedish Krona, particularly against the Euro (EUR/SEK), now threatens this price mandate.

Over the past few years, in order to prevent excessive appreciation of the Krona versus the Euro, the Riksbank moved in near-lockstep with the European Central Bank on its quest to loosen policy and drastically lower borrowing costs in the region. Since May 2014, when the ECB made clear it intended to rollout its own QE program to lower rates, the Riksbank has had to cut its main deposit rate from +0.75% to -0.35%, where it currently stands.

The efforts made by the Riksbank to prevent the Krona’s appreciation versus the Euro haven’t been a complete failure – EUR/SEK has traded in the mid-9.0000s for the better part of this year and hasn’t traded below 9.0000 since June 2014. Yet in advance of the ECB’s December meeting in which they cut their deposit rate, the Riksbank started to change its tune. Interest rate cuts have fallen out of favor. At the time, Riksbank Deputy Governor Per Jansson said that “the expansive policy potentially has negative side effects and those become bigger the more we do…if there will be a continued need to do more then we’re moving closer to currency interventions.”

The desire to intervene in the market to prevent EUR/SEK from depreciating further has been clear since early-November. According to Bloomberg News, Deputy Governor Jansson also said that he “would like to see the krona continue to be weak and weaken further from this level.” Since the start of November, when these comments were made, EUR/SEK has depreciated by another -1.7%, coming ever closer to the imaginary Maginot line held up since June 2014 between 9.0000 and 9.1000.

This threat of moving towards an intervention-based policy came to fruition on Monday, when the Riksbank’s Executive Board made “the decision required to be able to instantly intervene on the foreign exchange market if necessary, as a complementary monetary policy measure, to safeguard the rise in inflation.” This is not to say the Riksbank is protecting against inflation rising; it wants to protect the rise from slowing due to headwinds brought on by FX appreciation.

If the Riksbank Intervenes, What Will Happen?

Given comments from Riksbank policy officials, in context of inflation data and the EUR/SEK exchange rate, it’s clear that they do not want EUR/SEK to depreciate any further. Any efforts to intervene will be to prop up the EUR/SEK exchange rate. Likewise, should the Riksbank begin to engage the market, it will likely result in progressively higher volumes, and thus trading activity, in EUR/SEK. The expectation of wider price ranges – volatility – is currently exhibiting a positive influence on EUR/SEK: 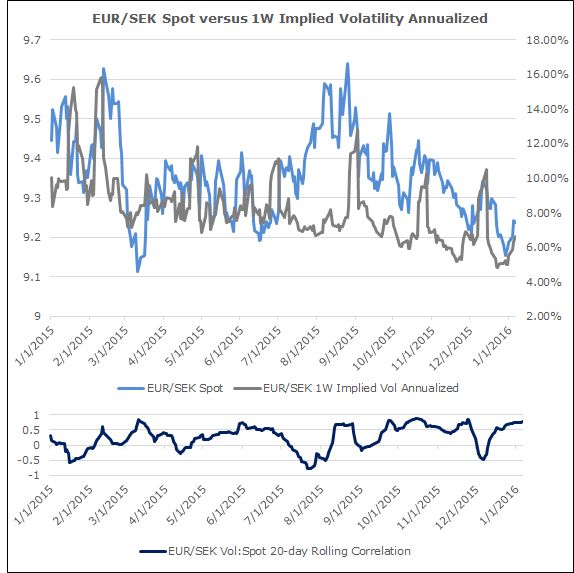 The rolling 20-day correlation between EUR/SEK spot prices and 1W implied vols has risen to +0.766 from -0.303 one month ago. This means that rising volatility has been appearing more frequently in tandem with higher EUR/SEK spot prices. Now that the Riksbank is communicating its intentions to intervene in the market, implied volatility measures have started to rise as market participants begin to frontrun any potential extraordinary action.

The Riksbank has Done This Before…

At the time, the concern was that the weak Swedish Krona would pose problems to the Swedish economy, and it was necessary for the central bank to prevent the Krona from weakening further in order to fulfil their task of maintaining price stability and promoting a safe and efficient payment system. Now, the efforts will focus on preventing the Krona from getting stronger. The Riksbank has shown the tendency to intervene against the predominant trend, with varying results.

The Riksbank may or may not have been successful in its efforts in 2001 to intervene. While the intervention efforts drew sharp spikes in volatility – which today would imply a rally in EUR/SEK – the results of the efforts in 2001 were short lived. EUR/SEK ultimately climbed through its June 2001 and July 2001 highs after the Riksbank’s reported efforts to tamper the rally. In its first Economic Review of 2002, it was concluded that “Experience indicates – as does the research carried out – that it is very difficult to assess the effects of foreign exchange interventions.”

The effectiveness of a central bank’s ability to intervene in the market is determined by the size of the central bank’s balance sheet relative to the size of the intervention. It’s easier for emerging market central banks or central banks operating in closed/semi-open economies, for example, to influence their currency’s various exchange rates, than say for the Fed or the BOJ to create a package large enough to permanently provoke a change in trend.

...Riksbank Intervention Efforts Will Be Short-term in Nature

The Riksbank falls somewhere in the middle of the spectrum, so now that it has exhausted its low/negative rates policy (according to Deputy Governor Jansson), it will resort to interventions once more – even if they don’t have full faith they may work. Our best guess would be that, in order to maximize the effectiveness of their intervention, they would do so in less liquid hours of the trading day, perhaps in between markets in the Tokyo time zone closing and markets in the London time zone opening.

Should the Riksbank intervene, it will do so gradually over the course of several sessions; considering that there isn’t a floor that they’re fighting, like the SNB was with EUR/CHF, it is highly unlikely that there is a singular, one-day move that defines the intervention. Instead, knowing that its efforts to intervene may only produce passing effects, the Riksbank may find that it will only act to stem rallies by the Krona/declines by EUR/SEK. With EUR/SEK spot prices having held above 9.0000/9.1000 since June 2014, it seems that price declines into this area are highly likely to trigger Riksbank action.