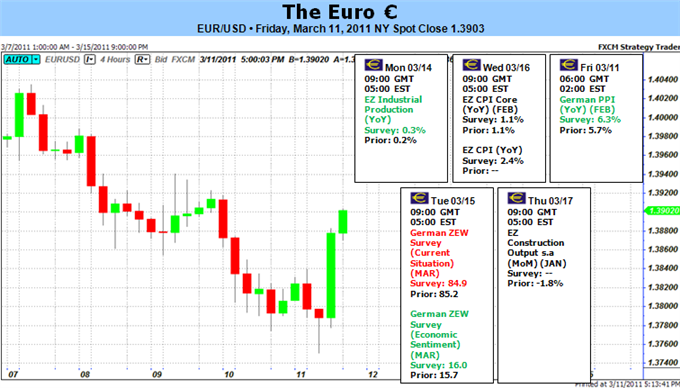 - EU officials announce concessions for Greece but not Ireland

- Both Greece and Spain are downgraded, drawing the EU deeper into a sovereign debt crisis

Scheduled event risk thins out over the coming week for the global docket; but that won’t sooth the euro. The shared currency is facing a critical decision that can tip the scales for direction and volatility through the indefinite future. The market will need to decide whether it is more concerned about financial stability in the region or the potential for higher returns through rate hike speculations. At its very core, this is a measure of risk versus reward; but unfortunately, the situation is not so black and white. First the market will need to determine the extent of its concerns and skepticism surrounding the EU’s financial commitments. Then, we will need to assess the bearing and conviction of underlying risk appetite trends.

Though there is always a natural level of equilibrium (or a fair value) for a currency; often times, a persistent bias can emerge when the crowd is naturally optimistic or pessimistic. For the euro, that lean is unclear. The week before last, the currency was exceptionally buoyant as the ECB set the countdown to the first rate hike in two years. Likely spurred to action before the inflation-logged Bank of England and already offering a substantial yield differential to the sterling, dollar, yen and Swiss franc; return hungry traders were drawn to the euro. And, with this natural advantage in place, the currency would be more sensitive to positive developments and resilient to negative events.

This heightened optimism, however, was fully offset this past week. As the week wore on, Greece received a three-notch downgrade, Spain suffered its own sovereign rating cut, Portugal was forced to pay exceptionally high rates at a debt auction and ratings agencies reported that the recapitalizing costs for Spain’s banking sector would be at least two-to-three times greater than the Bank of Spain’s 15.2 billion euro assessment. Whether or not these fundamental concerns can offset the yield forecast and dampen risk appetite remains to be seen; but the market will have a lot to consider come Monday.

After liquidity fully drained this past Friday, EU officials finally emerged from their special summit in Brussels and announced the progress made through the session. Little was expected from this gathering as it was a precursor to the official meeting over March 24th and 25th. However, the updates provided carried more significant than many would have expected. Despite Germany’s adamant position against expanding its rescues liabilities, it was agreed that the EFSF would be able to buy bonds directly in the primary market and Greece would be offered a conditional 100 basis point reduction to its emergency lending rates as well as an extension to its loans out to 7.5 years. On the other hand, officials merely voiced confidence in Portugal’s financial efforts (despite record bond yields) and noted that Ireland was not offered the same reduction in rates on emergency loans.

Where the euro goes from here is fully dependent on how confident in these commitments the market is. Lower rates for Greece are likely dependent on asset sales (a supposed prerequisite German Chancellor Merkel raised in a parliamentary meeting). What’s more, helping one EU member while neglecting Portugal and Ireland could lead the collective to failure just as surely as if they committed extra support to no one. If global market participants remain skeptical following last week’s downgrades and the realization that there is still an extraordinary demand for liquidity amongst the banks; the euro will falter. And, through it all, if the global markets are unwinding in a risk aversion bid; the euro will tumble regardless of its own internal, fundamental debates.