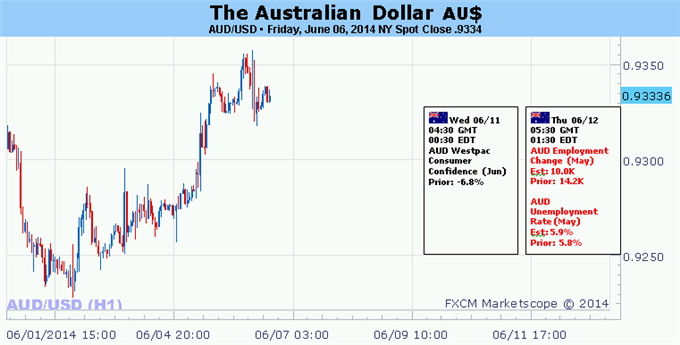 Domestically, the spotlight will be on May’s Employment data and a round of Chinese economic indicators. The former is expected to show hiring slowed, with the economy adding 10,000 jobs compared with the 14,000 increase in April. The jobless rate is expected to tick higher to 5.9 percent. Australian economic data has increasingly underperformed relative to expectations since mid-April, hinting economists are overestimating the economy’s performance and opening the door for downside surprises.

On the macro front, Federal Reserve policy speculation remains in focus. As we’ve discussed previously, the fate of the FOMC’s effort to “taper” QE asset purchases with an eye to end the program this year – paving the way for interest rate hikes – has been a formative catalyst for the markets this year. Last week’s supportive ISM data set, upbeat Fed Beige Book survey and marginally better-than-expected expected US jobs report sets the stage for continued reduction of monthly asset purchases and increasingly unencumbered speculation about outright tightening to follow.

The week ahead brings further evidence by way of May’s Retail Sales and PPI figures as well as June’s preliminary University of Michigan Consumer Confidence print. Improvements are expected on all fronts. Furthermore, US economic data has looked increasingly rosier relative to forecasts over the past two months, meaning surprise risks are tilted to the upside. That stands to narrow the Aussie’s perceived future yield advantage in the minds of investors. Firming bets on US stimulus withdrawal may likewise drive broader risk aversion. Needless to say, all of this bodes ill for the currency.