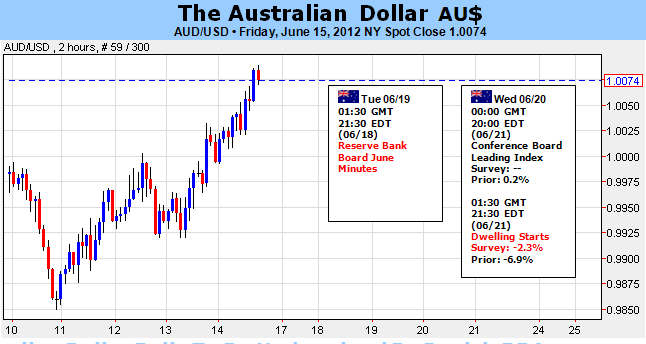 Australian Dollar Rally To Be Undermined By Dovish RBA

The Australian dollar advanced to a fresh monthly high of 1.0068 amid the rebound in risk sentiment, but dovish comments coming out of the Reserve Bank of Australia may dampen the appeal of the high-yielding currency as the central bank sticks to its easing cycle. Indeed, the RBA Minutes highlight the biggest event risk for the following week and the fresh batch of central bank rhetoric may fuel speculation for another rate cut as Governor Glenn Stevens turns increasingly cautious towards the $1T economy.

While speaking earlier this week, Mr. Stevens said businesses will need to better adapt to the persistent strength in the local currency amid the slowdown in global trade, and held a weakened outlook for private sector consumption amid the ‘grumpiness, dissatisfaction’ amongst households. As the slowing recovery dampens the outlook for growth and inflation, the RBA may continue to strike a dovish tone for monetary policy, and the board may show a greater willingness to lower the benchmark interest rate further as commercial banks across the region remain reluctant to pass on lower borrowing costs. According to Credit Suisse overnight index swaps, market participants are pricing an 81% chance for another 5bp rate cut in July, while borrowing costs are now expected to fall by more than 100bp over the next 12-months as China – Australia’s largest trading partner – continues to face a risk for a ‘hard landing.’ Although interest rate expectations continue to cast a bearish outlook for the aussie, the outcome of the Greek election as well as the headlines coming out of the Group of 20 Summit may prop up the high-yielding currency as the international community steps up its effort to tackle the sovereign debt crisis. In turn, the rebound in market sentiment may gather pace in the week ahead, and a slew of positive developments may increase the appeal of the high-yielding currency as risk trends continue to dictate price action in the foreign exchange market.

As the Australian dollar benefits from the rise in market sentiment, the AUDUSD certainly appears to be carving out an upward trending channel in June, and we may see the pair make a run at the 1.0200 figure should currency traders continue to increase their appetite for risk. However, as the RBA preserves its dovish tone for monetary policy, growing speculation for another rate cut may undermine the short-term rally in the AUDUSD, and the pair may ultimately put in a lower top ahead of the July meeting as the fundamental outlook for the region deteriorates. - DS