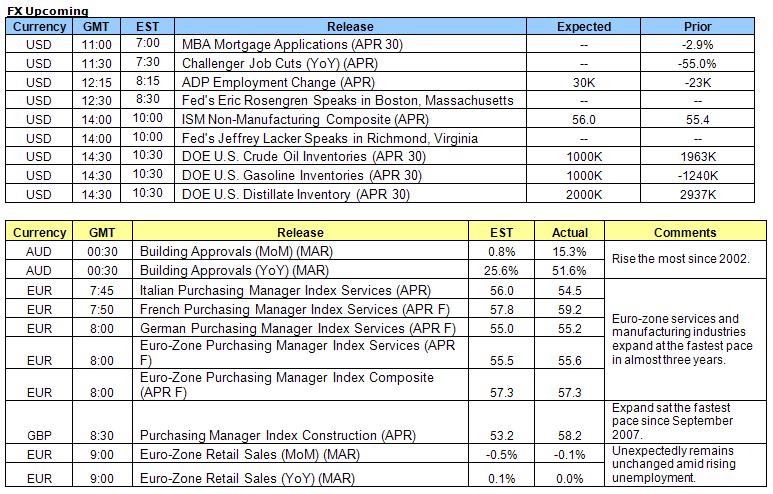 
Indeed, the southern journey maybe far from over as traders speculate that the $143 billion life line awarded to Greece will need to be extended to both Portugal and Spain. Looking at the equities market, U.S. futures are foreshadowing a lower open into the North American trade following yesterday’s biggest drop in global equities in approximately three months. Some traders may ask, exactly why all the uproar of Greece contagion to its euro-zone members? Some concerns that have arose are that Portugal is chronically uncompetitive and has a high budget deficit, Italy is heavily indebted, and Spain seems unable to restructure its economy, with the country posting the highest unemployment rate in the Euro-zone at 20.05% in the first quarter. Thus, these troublesome conditions in the sovereign countries amid policy maker’s comments are undeniably overshadowing what seems to be a positive economic calendar.

Overnight, European Central Bank council member Axel Weber said that the European rescued package for Greece is the best way to avoid contagion, and went onto add that Greece’s situation is not comparable with other states. At the same time, he announced that “there is a threat of grave contagion effects for other member states in the monetary union and increasing negative feedback loop effects on capital markets,” during his statement today before German lawmakers in Berlin vote on a rescue for Greece. Furthermore, Weber publicized that Greek insolvency would have Lehman-like effects and “dramatic consequences.” Moreover, European Union Economic and Monetary Affairs Commissioner Olli Rehn announced that he expects Italy to “intensify” work on fiscal consolidation as the country has “limited fiscal space.” Nevertheless, the economic docket was fairly quiet overnight as final PMI services and composite readings were all virtually in line with expectations. Euro-Zone retail sales in March retreated an annualized 0.1% after falling 0.2% the previous month as figures showed that was reading was slightly better than economist’s expectations of -0.5%. On the positive side, the EU lowered the euro-area 2010 deficit forecast to 6.6% from 6.9%, and raised the euro-area 2010 GDP growth forecast to 0.9% versus 0.7%.

The British pound halted a three day decline to reach an overnight high of 1.5175 ahead of tomorrow’s election as market participants see a risk for a hung parliament following former British finance minister Nigel Lawson stating that “the prospect of a hung parliament is already priced into the markets” last Friday. Meanwhile, EU’s Rehn said that the U.K. government should address debt level and agree on a fiscal consolidation program. Taking a look at the economic docket overnight, the BRC index in April jumped 2.0% after climbing 1.2% the previous month, while construction in the U.K. expanded at the fastest pace since September 2007. The gauge of building activity rose to 58.2 from 53.1 in March on the back of increased demand for homes and commercial property.

The Greenback was up against most major currencies expect for the British pound as risk appetite picked up from where it left off yesterday. The U.S. dollar is likely to gain momentum going into the U.S. trade as the world’s largest economy is expected to show that the ADP employment change for the month of February jumped 30K, while the ISM non-manufacturing composite index rose to 56.0 in April from 55.4 in March. MBA mortgage applications and challenger job cuts are also on tap.