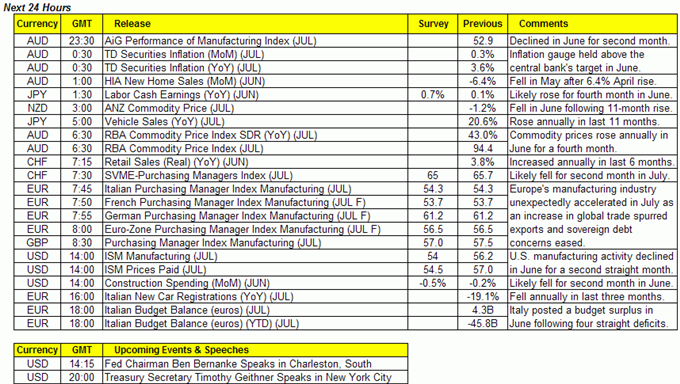 The U.S. dollar after finding earlier support on global growth concerns the reserve currency would ultimately end flat on the day. The Fed Beige book report pointing toward slower U.S. growth started Asian markets off on the wrong foot and the ensuing flight to safety sent the dollar surging. Adding to bearish sentiment were market’s expectations for a weaker pace of growth which was the case with the second quarter GDP reading falling to 2.4% from a revised 3.7% the period prior. The improvement in growth for the first three months of the year combined with upside surprises in the Chicago PMI and the final reading of the University of Michigan consumer confidence reading helped reverse sentiment and the dollar’s fortunes

First quarter GDP saw a one percent improvement from its final reading led by a surge in gross private investment from 14.7% to 29.1% as companies increased their purchases of equipment and software. The trend continued in the second quarter with another 28.8% increase helping to offset the slower pace of personal consumption. The increases in business spending could be a prelude to future hiring, easing concerns over the dearth of consumer spending. The upward revision in the consumer sentiment reading to 67.8 from 66.5 also added to the brightening picture for domestic demand. The main catalyst for b optimism was the Chicago manufacturing reading showing an improvement to 62.3 from 59.1 versus forecasts for a decline to 56.0. The sector has been the main engine of growth and signs of sustainability could put the economy on a stronger than predicted pace.

Monday’s release of the ISM manufacturing index will give a more complete picture of the sector and if early forecasts are any indication then we could see dollar support return. Economists are expecting a decline to 54.0 from 56.2. Additionally, forecasts for non-farm payrolls to decline by 60,000 could also be a source of concern. However, deteriorating U.S. fundamentals may start to weigh in the greenback as interest rate expectations dim.

Related: Discuss the Dollar in the DailyFX Forum, US Dollar Awaits a Clear Bearing on Risk, Looks Ahead to 2Q GDP

The unemployment rate in the 16 member euro area remained unchanged at a 12 year high, with the breakdown of the report showing the largest increase in Spain. Meanwhile, the inflation estimate advanced to the highest level since November 2008. Across the news wire overnight, Moody’s changed Iceland’s credit rating outlook from stable to outlook as the government finds difficulty achieving a resolution to its dispute with the UK and Dutch governments. Indeed, markets have brushed off the recent ECB stress tests results as the measures in which the banks were conducted under were not stressful enough, in turn, the Euribor rate continues advance, posting yearly highs two days in a row. Going into next week’s trade, market participants will shift their focus to the ECB rate decision. As of late, traders are pricing in a zero percent chance that the European Central Bank will increase rates twenty five basis points, according to the Credit Suisse overnight index swaps.

The British Pound has ended the week higher against the greenback. For this upcoming week, the Bank of England is expected to release their asset purchase target and its key overnight lending rate. As both readings are expected to remain unchanged, price action will likely be muted as traders will wait for the BoE minutes on August 18th in order to gain a grasp of policy direction going forward. During last month’s meeting, Andrew Sentance voted against the majority and pushed for a rate hike. Even though other members have yet to accompany Sentence’s call for an increase in rates, they did note that the recent value added tax measures which will begin 2011 are likely to upward pressure on inflation.

The USDCAD looks to continue its lackluster performance as price action remains confined by the 61.8 and 50.0 percent Fibonacci retracement on the April 22nd to May 25th upswing. These levels are of great importance in that they coincide with the 100 and 200-day SMA’s. Today’s release of economic activity paved the way for loonie strength. Next week, traders will look towards the change in employment, which is forecasted to advance for the seventh straight month.

The Yen has continued to gain ground against the U.S. dollar as traders seek safety amid speculation of slowing growth in the U.S. will spur demand for safer assets (i.e. the Yen). Indeed, the single currency gains momentum during times of financial turmoil as Japan’s trade surplus means it does not have to rely on overseas lenders. Today, we saw that housing starts jumped 0.6 percent. National property prices remain to the downside, while the residential property market seems to be troubled by high vacancy rates.