A further slowdown in the Euro-Zone’s Consumer Price Index (CPI) may heighten the bearish sentiment surrounding the EUR/USD as it puts increased pressure on the European Central Bank (ECB) to implement more non-standard measures.

There’s growing bets that the Governing Council may have little choice but to implement quantitative easing across the monetary union amid the growing threat for deflation, and the single currency remains at risk of facing additional headwinds in 2015 as the economic recovery remains subdued.

Waning confidence paired with the renewed weakness in private sector consumption may drag on price growth, and the growing risk for deflation may push the ECB to adopt more emergency measures in an effort to achieve its one and only mandate to deliver price stability.

However, the CPI report may show sticky price growth in Europe as the region returns the growth, and a stronger-than-expected inflation print may trigger a more meaningful correction in EUR/USD as it mitigates the risk for deflation. 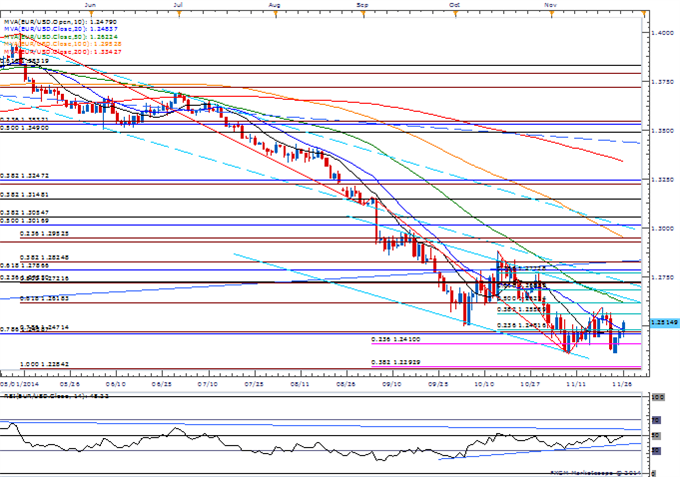 The Euro-Zone Consumer Price Index (CPI) rose an annualized 0.4% after expanding 0.3% in September, while the core rate of inflation unexpectedly slipped to 0.7% from 0.8% during the same period. Despite the rebound from a 5-year low, the weakening outlook for inflation may force the European Central Bank (ECB) to implement additional monetary support as the Governing Council struggles to achieve its one and only mandate for price stability. Despite the initial tick higher in EUR/USD, the single currency struggled to hold its ground during the North America trade as the pair ended the day at 1.2521.