- Core Rate of Inflation to Hold at Annualized 1.7% for Third Month.

A downtick in the U.S. Consumer Price Index (CPI) may spark a more meaningful rebound in EUR/USD as it dampens the interest rate outlook for the world’s largest economy.

It seems as though the Federal Open Market Committee (FOMC) is in no rush to normalize monetary policy as a growing number of central bank officials highlight the downside risk for inflation expectations, and a marked slowdown in price growth may undermine the bullish sentiment surrounding the greenback as central bank hawks Richard Fisher and Charles Plosser lose their vote in 2015.

Subdued wages paired with the slowdown in service-based activity may drag on price growth, and a weaker-than-expected CPI print may trigger a larger rebound in EUR/USD as market participants scale back bets for higher borrowing costs in the U.S.

Nevertheless, the ongoing improvement in household and business confidence may stoke faster price growth, and a strong inflation report should boost the appeal of the greenback as it raises the Fed’s scope to normalize monetary policy sooner rather than later. 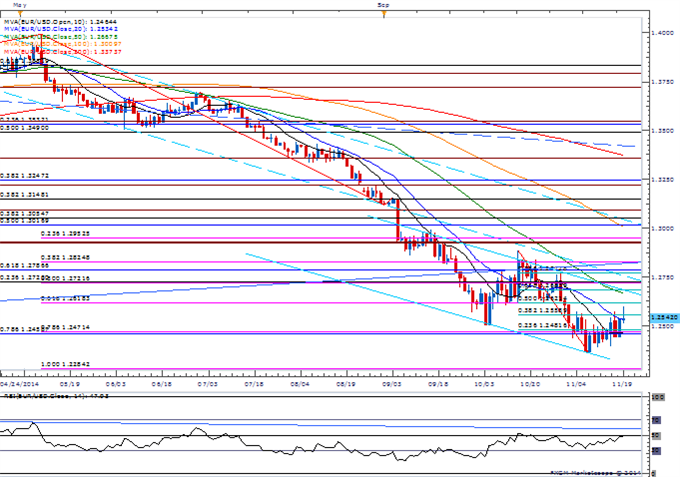 The U.S. Consumer Price Index (CPI) held steady at an annualized rate of 1.7% in September amid forecasts for a 1.6% print. At the same time, the core rate of inflation also remained unchanged at 1.7% during the same period. Lower energy and transportation costs continued to drag on price growth, while the report showed stable prices for nearly all other sectors. With the subdued outlook for inflation, the Fed may retain the highly accommodative policy for an extended period of time in order to balance the risks surrounding the region. The better-than-expected CPI print spurred a bullish reaction in the greenback, with EUR/USD slipping below 1.2675 during the North America trade to end the day at 1.2637.