- Will ECB Venture into QE as Weak Growth Raises Threat for Deflation?

The Euro-Zone’s 3Q Gross Domestic Product (GDP) report may generate a larger correction in EUR/USD as the monetary union is expected to return to growth after stagnating during the three-months through June.

However, a rebound in the growth rate may do little to heighten the appeal of the single-currency as the European Central Bank (ECB) is widely expected to implement more non-standard measures in December, and the ongoing deviation in the policy outlook continues to foster a bearish outlook for EUR/USD as the Federal Reserve moves away from its easing cycle.

Improved confidence along with the pickup in building activity may generate a more meaningful rebound in the growth rate, and an upbeat GDP report may trigger a bullish reaction in the Euro as it dampens bets for QE in the euro-area.

Nevertheless, high unemployment paired with the slowdown in private consumption may continue to drag on economic activity, and a dismal growth print may put increased pressure on the ECB to offer additional monetary support amid the growth threat for deflation. 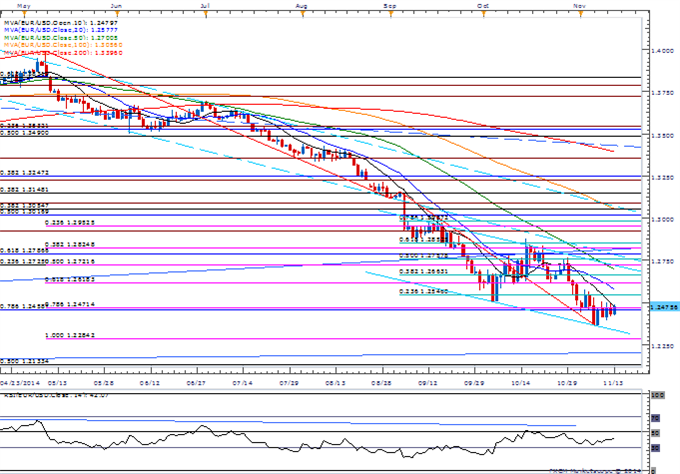 The euro-area economy failed to grow in the second quarter of 2014 following a 0.2% expansion during the first three-months of the year, raising the threat for deflation across the monetary union. The weaker-than-expected growth was mainly attributed to the economic contraction Germany, with Europe’s growth engine slowing for the first time since 1Q 2013. The lackluster recovery is likely to put increased pressure on the European Central Bank (ECB) to boost market liquidity especially as private-sector lending remains subdued. Despite missing market expectations, the EUR/USD climbed above the 1.3400 region during the European trade, but largely struggled to retain the gains as the pair closed at 1.3362.