- Will There Be a Larger Dissent as the Fed Looks to End QE in October?

The Federal Open Market Committee (FOMC) interest rate decision may spur a bearish reaction in the dollar (bullish EUR/USD) if the central bank remains reluctant to move away from the zero-interest rate policy (ZIRP).

Why Is This Event Important:Even though the Fed is widely expected to conclude its asset-purchase program at the October 29 meeting, we would need a more hawkish twist to the forward-guidance for monetary policy to favor further USD strength.

The dollar may come under pressure should we get more of the same from the Fed, and the greenback may face a larger correction over the remainder of the month should Chair Janet Yellen see greater scope to retain the highly accommodative policy stance for an extended period of time.

Nevertheless, sticky inflation paired with the uptick in wage growth may spur a greater dissent within the committee and push the FOMC to lay out a more detailed exit strategy as the central bank looks to move away from its easing cycle. 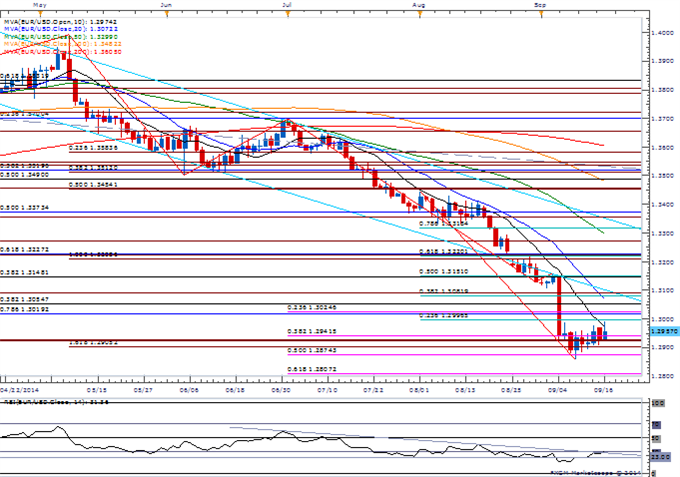 The Federal Open Market Committee (FOMC) voted to reduce its asset-purchase pace to $25B from $35B in July amid the sharp economic rebound in the second quarter. However, the Fed also highlighted the significant underutilization of labor resources and reiterated that it is appropriate to maintain the current fed fund rate for a considerable period of time even after the quantitative easing program ends. The Fed’s dovish tone dragged on the greenback, with EUR/USD climbing above 1.3400, but we saw limited follow-through behind the initial reaction as the pair ended the day at 1.3395.