According to a Bloomberg News survey, all of the 13 economist polled see the Reserve Bank of New Zealand (RBNZ) keeping the interest rate on hold at 3.50%, but the fresh batch of central bank rhetoric may produce increased volatility in the NZD/USD as market participants weigh the outlook for monetary policy.

In light of the marked depreciation in the NZD/USD, the biggest risk for surprise will be a removal of the verbal intervention on the kiwi, and a further decline in the exchange rate may prompt Governor Graeme Wheeler to adopt a more hawkish tone for monetary policy as it fuels imported inflation.

Below-target inflation along with the slowdown in employment may encourage the RBNZ to retain a period of ‘interest rate stability’ in New Zealand, and the fresh batch of central bank rhetoric may spur a further decline in the NZD/USD should it drag on interest rate expectations.

Nevertheless, the RBNZ may no longer jawbone the kiwi as the lower exchange rate raises the risk for imported inflation, and the NZD/USD may face a more meaningful rebound ahead of the next Fed meeting on September 17 should Governor Wheeler unexpectedly adopt a more hawkish tone for monetary policy. 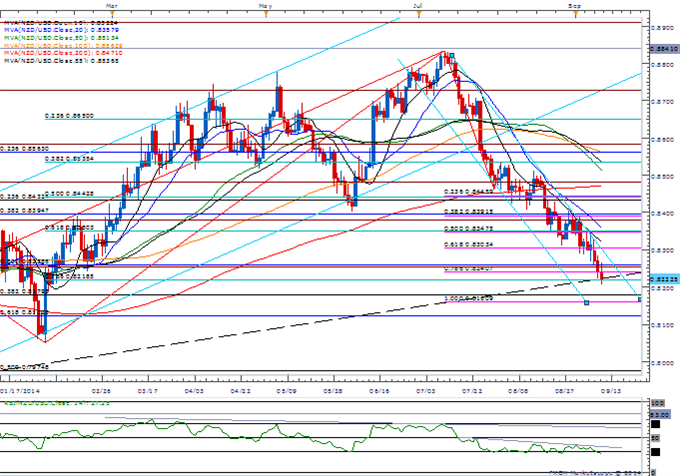 Price & Time: USD/JPY Where To Next?

As expected, the Reserve Bank of New Zealand (RBNZ) raised the Official Cash Rate (OCR) by another 25 pips to 3.50%, marking the fourth consecutive interest rate hike since March 2014. However, the RBNZ revised down the GDP forecast to 3.7% from 4% in June amid falling export prices of diary and timber, and went onto say that there will ‘be a period of assessment before interest rates adjust further towards a more-neutral level’. The NZD/USD was pulled down nearly 90 pips following the shift in the policy outlook, with the pair ending the day at 0.8584.