The Federal Open Market Committee (FOMC) Minutes may spur a further decline in the EUR/USD should we see a growing number of central bank officials show a greater willingness to normalize monetary policy sooner rather than later.

With expectations for a stronger recovery in the second-half of the year, the policy statement may highlight a growing dissent within the FOMC, and the central bank may adopt a more hawkish tone this time around as it becomes increasingly confident in achieving its dual mandate over the policy horizon.

For LIVE SSI Updates Ahead of the FOMC Minutes, Join DailyFX on Demand

Sticky inflation paired with the marked pickup in 2Q GDP may encourage a greater number of FOMC officials to drop their dovish outlook for monetary policy, and the bullish sentiment surrounding the greenback may gather pace ahead of the next Fed meeting on September 17 should the meeting minutes highlight a more detailed exit strategy.

However, subdued wage growth paired with the recent weakness in private sector consumption may keep the Fed on the sidelines for an extended period of time, and the policy statement may dampen the appeal of the reserve currency should it drag on interest rate expectations. 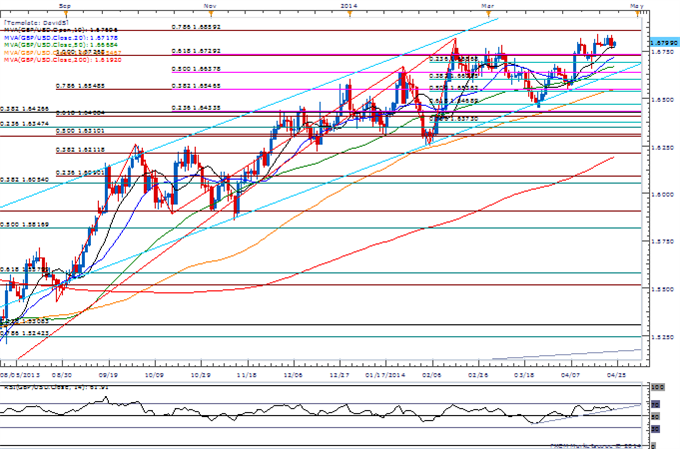 The Federal Open Market Committee (FOMC) tapered the asset purchase program to $25B in July from $35B in June even as the committee expressed concerns over underutilization of labor resources. Moreover, the central bank reiterated that it would likely keep the current range for the fed fund rate for a considerable period of time even after the asset purchase program ends. The sluggish labor utilization and the committee’s dovish tone dragged on the greenback as EUR/USD climbed to a high of 1.3404 after the release. The pair fluctuated around 1.3393 during the rest of the North American trade and closed at 1.3395.