- Will We See a Greater Dissent as the Fed Sees QE Ending in October?

The Federal Open Market Committee (FOMC) interest rate decision may spur a bearish reaction in the dollar (bullish EUR/USD) should we get more of the same and see another unanimous vote to retain the highly accommodative policy stance.

Why Is This Event Important:Even though the Fed is widely expected to conclude its asset-purchase program in October, the forward-guidance for monetary policy may play a greater role in driving USD price action as market participants still see the first rate hike in 2015.

The Fed may sound more neutral this time around amid sticky inflation paired with the uptick in wage growth, and we may see a bullish reaction in the USD should the fresh batch of central bank rhetoric boost interest rate expectations.

Nevertheless, we may get more of the same from the Fed amid the ongoing slack in the real economy, and the dollar may face another downturn over the near-term as Chair Janet Yellen remains reluctant to move away from the zero-interest rate policy (ZIRP). Join DailyFX on Demand to Cover the Entire FOMC Rate Decision! 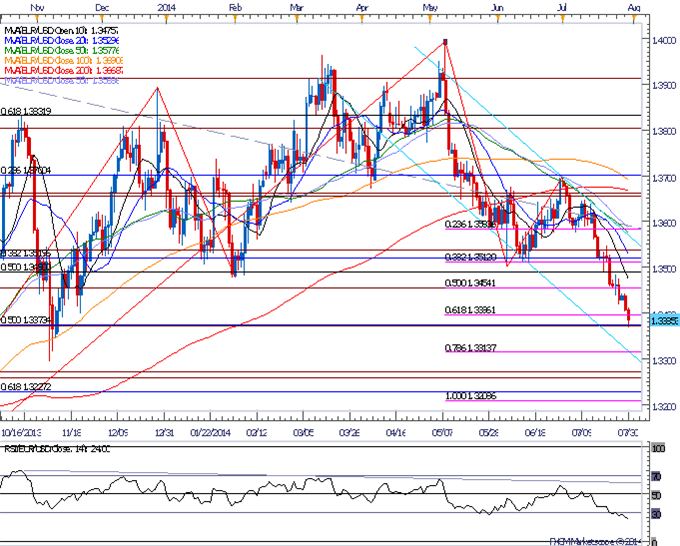 The Federal Open Market Committee (FOMC) reduced its asset-purchase program by another $10B in June, but retained the dovish forward-guidance for monetary policy as the central bank reiterated that the benchmark interest rate is likely to stay low for a considerable period of time even after the Fed halts the quantitative easing program. The initial reaction to the FOMC interest rate decision was short-lived as the EUR/USD failed to hold below the 1.3550 region, and the greenback lost ground during the remainder of the North American trade as the pair closed at 1.3594.