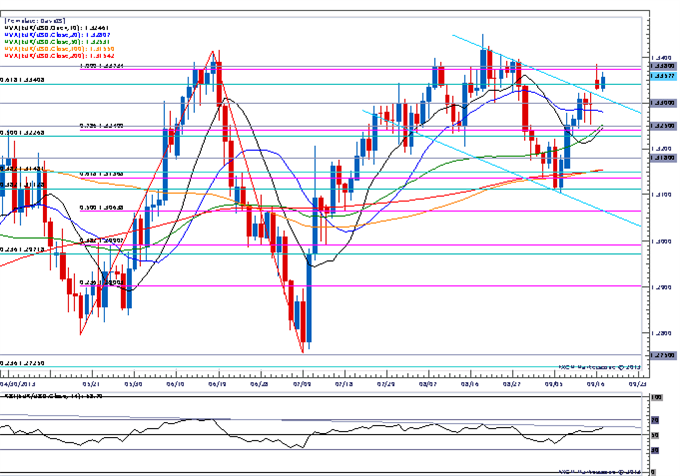 A material shift in the Federal Open Market Committee’s (FOMC) policy may prop up the U.S. dollar as market participants see the central bank scaling back its bond-purchasing program to $40B in September.

Indeed, there are three possible outcomes (taper, no taper & no taper with more detailed exit strategy), all of which will set the near-term outlook for the U.S. dollar , but the more encompassing market reaction may take shape following Chairman Ben Bernanke’s press conference should the central bank head continue to call for an end of quantitative easing in 2014.

The updated forecasts (growth, inflation & interest rate) from the Fed may highlight a stronger recovery for the U.S. economy, and any comments showing a greater willingness to implement the exit strategy ahead of schedule may generate a sharp rally in the dollar as market participants see higher interest rates on the horizon.

Nevertheless, the Fed may show further support for its highly accommodative policy stance amid the threat for deflation, and signs of a delay in the exit strategy may trigger a marked decline in the reserve currency as central bank dove Janet Yellen inches closer to taking the chairmanship.

For Full Coverage of the FOMC Meeting, Join Analyst on Demand

The FOMC sounded rather dovish after maintaining its current policy in July as the central bank continued to highlight the threat of subdued inflation, but it seems as though that a growing number of central bank officials are becoming increasingly upbeat towards the economy as the committee sees a stronger recovery ahead. Nevertheless, the dollar struggled to hold its ground following the policy statement, with the EURUSD pushing above the 1.3325 region, but we saw the pair consolidate going into the close as the euro-dollar end the day at 1.3300.