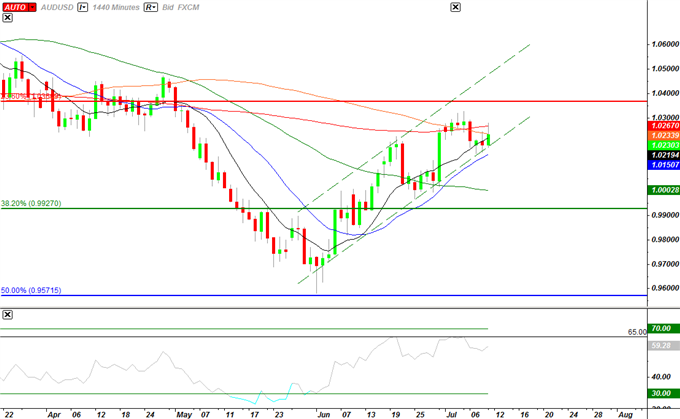 Job creation in Australia is widely expected to hold flat in June and the slowdown in employment may spark a selloff in the exchange rate as it dampens the outlook for the $1T economy. As the Reserve Bank of Australia maintains a dovish outlook for monetary policy, a dismal development is likely to fuel bets for lower borrowing costs, and we may see the central bank carry out its easing cycle throughout the second-half of the year in an effort to encourage a stronger recovery. According to Credit Suisse overnight index swaps, market participants are now looking for nearly 100bp worth of rate cuts over the next 12-months, while investors are pricing a 60% chance for a move to 3.25% at the next meeting on August 7 as the fundamental outlook for the region continues to deteriorate.

The ongoing expansion in private sector spending paired with the rebound in building activity may produce an unexpected rise in hiring, and a positive outcome may dampen speculation for another rate cut in August as it raises the prospects for a stronger recovery. However, the drop in business confidence along with the larger-than-expected contraction in operating profits may drag on the labor market, and we may see firms scale back on employment as they cope with a slowing recovery.

As the AUDUSD maintains the upward trending channel from June, we may see the pair track higher over the remainder of the week, but the lack of momentum to push back above the 23.6% Fibonacci retracement from the 2010 low to the 2011 high around 1.0360-70 casts a bearish outlook for the exchange rate as the relatives strength index continues to find resistance around the 65 figure. The reversal in the oscillator suggests that the AUDUSD is carving out a lower top below the 23.6% Fib, and we will maintain a bearish forecast for the aussie-dollar as interest rate expectations deteriorate. For a complete outlook including scalp targets on the AUDUSD ahead of tomorrow's print, refer to Michael Boutros’Winners & Losers report.

In light of expectations for a flat employment print, we would need a deviation from market expectations to see a tradable event, and a better-than-expected figure may pave the way for a long Australian dollar trade as it dampens expectations for another rate cut. Therefore, if we see job growth pick up in June, we will need to see a green, five-minute candle following the release to generate a buy entry on two-lots of AUDUSD. Once these conditions are fulfilled, we will set the initial stop at the nearby swing low or a reasonable distance from the entry, and this risk will establish our first objective. The second target will be based on discretion, and we will move the stop on the second lot to cost once the first trade hits its mark in order to preserve our profits.

In contrast, the drop in business sentiment paired with fears of a ‘hard land’ in China – Australia’s largest trading partner – may sap hiring, and a dismal print would drag on the exchange rate as it dampens the fundamental outlook for the region. As a result, if employment contracts from the previous month, we will carry out the same setup for a short aussie-dollar trade as the long position laid out above, just in the opposite direction. 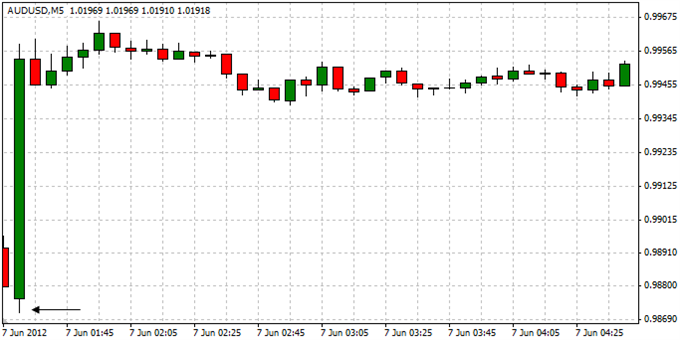 Australian employment increased another 38.9K in May after expanding a revised 7.0K the month prior, while the jobless rate advanced to 5.1% from 5.0% during the same period as discouraged workers returned to the labor force. Indeed, the unexpected jump in job growth propped up the Australian dollar, with the AUDUSD climbing back above the 0.9900 figure, but we saw the high-yielding currency consolidate throughout the day as the pair closed at 0.9891.