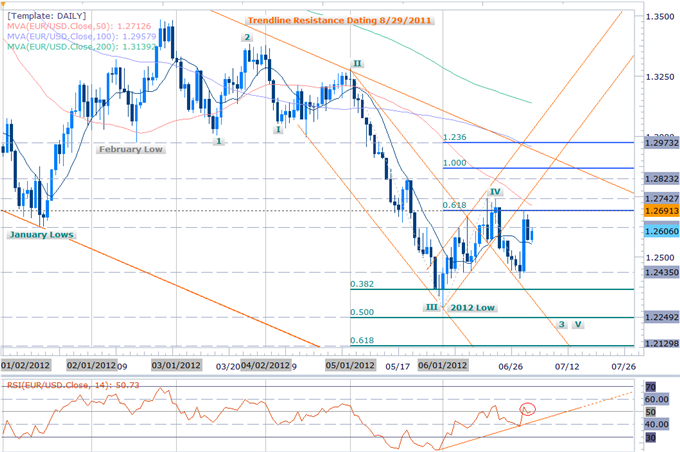 The European Central Bank is widely expected to ease monetary policy further in July and the Governing Council may shore up the ailing economy throughout the second-half of the year amid the heightening threat for a prolonged recession. A Bloomberg News survey shows 51 of the 62 economists polled are looking for at least a 25bp rate cut, while investors are pricing a 35% chance for lower borrowing costs according to Credit Suisse overnight index swaps. Indeed, the discrepancy among market participants may ultimately trigger a major move the EURUSD, but we remains bearish against the single currency as the fundamental outlook for the region turns increasingly bleak.

As the region continues to benefit from global trade, sticky price growth in the euro-area may encourage the ECB to retain its current policy in July, and we may see President Mario Draghi soften his dovish tone for monetary policy as the EU steps up their effort to address the debt crisis. However, the slowdown in private sector consumption paired with the ongoing weakness in the labor market may fuel fears of a pronounced economic downturn, and the Governing Council may see scope to implement a range of tools as threat for contagion continues to dampen the outlook for the region.

A look at the encompassing structure sees the EURUSD holding just below soft daily resistance at the former January lows at 1.2623. A wave count suggests that we are currently in wave 3 of 5 with our outlook weighted to the downside pending completion of wave 5 below the 2012-lows at 1.2287. A breach above interim resistance eyes subsequent ceilings at the 61.8% Fibonacci extension taken form the June 1st and 28th lows at 1.2690 and the June highs at 1.2742. A breach above this mark invalidates the our bias with such a scenario risking an advance to the 1005 extension at 1.2865. Daily support targets are eyed at 1.2435 backed by the 38.2% Extension taken form the May 1st and June 18th highs at 1.2370, backed by our primary objective at the 50% extension at 1.2250. Note that daily RSI has continued to hold below the 60-mark, with a break below trendline support triggering subsequent downside targets. 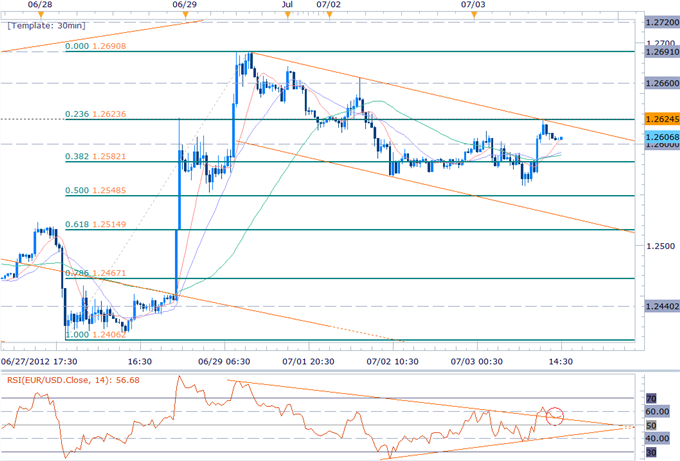 Bets for a rate cut certainly casts a bearish outlook for the single currency, but the market reaction may pave the way for long Euro trade should the central bank continue to endorse a wait-and-see approach. Therefore, if the ECB preserves its current policy in July, we will need to see a green, five-minute candle following the announcement to establish a buy entry on two-lots of EURUSD. Once these conditions are fulfilled, we will set the initial stop at the nearby swing low or a reasonable distance from the entry, and this risk will generate our first target. The second objective will be based on discretion, and we will move the stop on the second lot to cost once the first trade hits its mark in order to preserve our profits.

In contrast, the ongoing slack in the real economy paired with the persistent threat for contagion may push the ECB to expand monetary policy further, and we may see the central bank carry out its easing cycle throughout 2012 as region remains at risk for a prolonged recession. As a result, if the Governing Council cuts borrowing costs or expands its non-standard measures, we will implement the same strategy for a short euro-dollar trade as the long position laid out above, just in reverse. 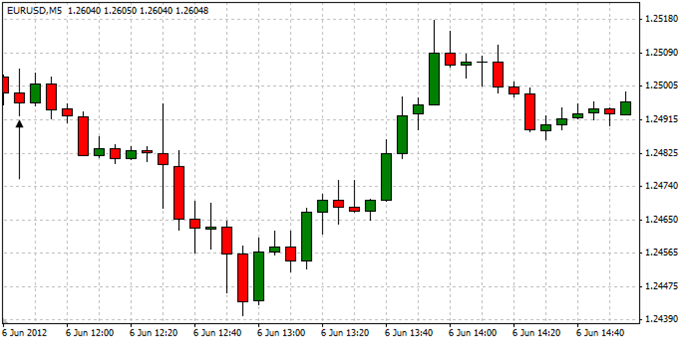 Indeed, the European Central Bank kept the benchmark interest rate at 1.00%, but it seems as though the central bank is getting ready to act as a ‘few’ members of the Governing Council sees scope to lower borrowing costs further. The EURUSD tracked lower following the meeting, with the exchange rate slipping below the 1.2450 figure, but the reaction was short-lived as the pair ended the day at 1.2580.