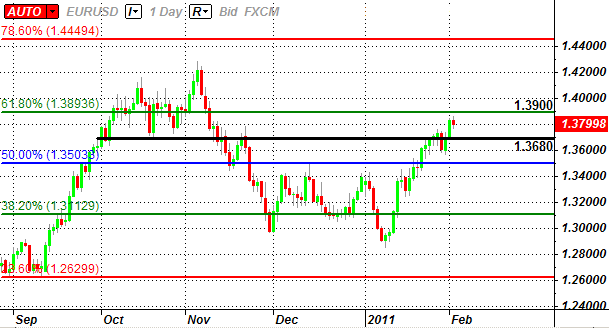 As market participants expect the European Central Bank to maintain its wait-and-see approach in February, we may see a muted reaction to the rate announcement, but comments from President Jean-Claude Trichet is likely to spark increased volatility in the exchange rate as investors weigh the prospects for future policy. However, as the EU Summit kicks off on Friday, the EUR/USD may hold a narrow range going into the end of the week, and fears surrounding the sovereign debt crisis may continue to bear down on the exchange rate as the risk for contagion intensifies.

A Bloomberg News survey shows all of the 58 economists polled forecast the Governing Council to hold the benchmark interest rate at 1.00%, while investors are pricing a zero percent chance for a 25bp rate hike according to Credit Suisse overnight index swaps. However, we may see the ECB continue to strike a hawkish tone for future policy as inflation exceeds the 2% target for the second month in January, and the central bank head may attempt to talk down the risks for the region as European policy makers struggle to restore investor confidence.

The CPI estimate for the Euro-Zone advanced to an annualized pace of 2.4% in January to mark the fastest pace of growth since October 2008, and inflation expectations may push higher over the coming months as households and businesses face rising energy costs. As the ECB maintains its one and only mandate to ensure price stability, the central bank may see scope to reestablish its exit strategy in the first-half of 2011, and hawkish comments following the rate decision could lead the EUR/USD to make a run at the 61.8% Fibonacci retracement from the 2009 high to the 2010 low around 1.3890-1.3900.

However, as the European financial system remains weak, with the region facing an uneven recovery, the ECB could be forced to delay its exit strategy further as the governments operating under the fixed-exchange rate system struggle to manage their public finances. Accordingly, the ECB may retain a cautious tone for the real economy as the fundamental outlook remains clouded with uncertainties, and dovish comments from the central bank could lead the EUR/USD to retrace the advance from earlier this week as interest rate expectations falter.

As the ECB delivers its policy statement half an hour following its interest rate announcement, trading this event is certainly not as clear cut as some of our previous trades, but comments from the central bank could set the stage for a long euro trade as the central bank sees a growing risk for inflation. Therefore, if the ECB raises its outlook for price growth and sees scope to normalize monetary policy later this year, we will need a green, five-minute candle following the communiqué to establish a buy entry on two-lots of EUR/USD. Once these prerequisites are fulfilled, we will set the initial stop at the nearby swing low or a reasonable distance after taking market volatility into account, and this risk will generate our first target. The second objective will be based on discretion, and we will move the stop on the second lot to cost once the first trade reaches its mark in order to preserve our profits.

On the other hand, the ECB may continue to curb its outlook for future growth as the region copes with an uneven recovery, and the central bank may talk down the risks for inflation as the ongoing weakness within the economy dampens the risk for inflation. As a result, dovish comments following the rate decision is likely to bear down on the exchange rate, and we will implement the same strategy for a short euro-dollar trade as the long position laid out above, just in reverse.