- Short covering rally in British Pound – every other major suffers.

- Implications for GBPUSD breakout are of high significance.

A scan of this morning’s best and worst performers via the Strong/Weak app shows that the British Pound is having an incredibly strong day, netting nearly +1000-pips cumulatively against the major currencies covered by DailyFX Research. The majority of these gains have occurred during the European session, as traders continued their rotation away from the commodity currencies (which began last Thursday) and into the European growth currencies (with price action the past three days, including today, confirming this trend).

Market participants may have been waiting for confirmation of the UK’s growth resiliency in the 3Q, as today’s figures have spurred a significant leg higher in the British Pound across the board. Notably, the GBPJPY continues to make headway after clearing the 2009 high of 163.05/15 last week.

Further gains may be difficult to come by over the next few days given thinner holiday trading conditions, but the pair is on track towards a significant Fibonacci level: the 38.2% retracement of the 2007 high to 2011 low at 168.17. 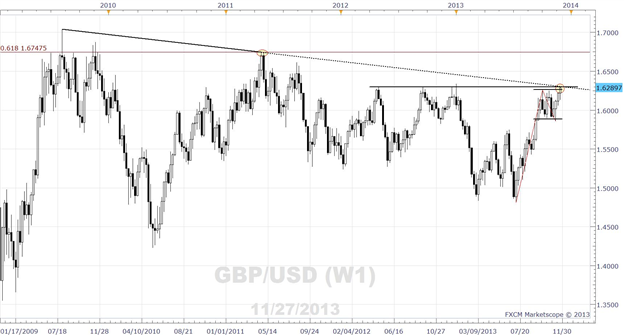 The more significant price action may be occurring in the GBPUSD, which broke above its two-month sideways range top at $1.6260:

- While there was potential for a Double Top, it now appears that a bullish Bull Flag has been forming with respect to the July low.

- Confirmation of the upswing will be achieved with (ideally) the month of November closing above 1.6300/55, the yearly high set on the first trading day of 2013 and the descending TL off of the 2009 and 2011 highs.