The Japanese Yen, Swiss Franc and even the U.S. Dollar were lifted by significant demand in the Asian and European sessions as market participants fled higher yielding assets in return for safety following a tumultuous weekend in which Standard & Poor’s downgraded U.S. government debt and the European sovereign debt crisis inched closer towards reaching its breaking point. On Monday, thus far, the Japanese Yen was the strongest currency, up the most against the New Zealand Dollar, the Australian Dollar and the Euro, respectively.

Similarly, the Swiss Franc and the U.S. Dollar were up against a basket of major currencies. The shift to risk-aversion was in full-swing in the pre-North American trade, with the FX Carry Trade Index, an equal-weighted basket of long-Aussie, -Kiwi and –Loonie positions versus an equal weighted basket of short-Franc, -Dollar and –Yen, down 1.47 percent, at the time this report was written.

The recent rally by the Swiss Franc, despite measures and threats by the Swiss National Bank last week to curb the currency’s appreciation, has gathered significant momentum, provoking Swiss officials to reconvene today in order to figure out ways to insulate the economy from potential slower growth and reduced net exports amid a stronger domestic currency. A strong domestic currency hurts the Swiss economy significantly, as exports account for more than half of the aggregate growth figure.

On Friday, Swiss National Bank President Philip Hildebrand said that policymakers are “willing to take further measures if those are necessary” in order to weaken the Swiss Franc. He further stated, “At some point, an overvaluation becomes absurd and that is already the case the Swiss Franc today.” The Swiss National Bank, on August 3, cut interest rates to “as close to zero as possible” from 0.25 percent, while simultaneously announcing that it would increase the supply of Francs to the market, in order to artificially devalue the safe haven currency, a move that has been inefficient given the Franc’s meteoric rise back towards record highs against the Euro and the U.S. Dollar.

Amid the capital flight to safer assets, higher yielding currencies, such as the New Zealand Dollar, faced significant headwinds, as market participants chose safety over potential accrued interest on the carry trade. Similarly, the Australian Dollar fell against the safe haven currencies as well, running the Northern antipodean currency’s declines to seven out of eight days, good for a -11.99 percent return against the Swiss Franc since July 27 and a -6.50 percent return against the Greenback over the same period. As concerns over the health of the global economy continue to build, coupled with the worsening sovereign debt crisis in Europe that has now led to the European Central Bank intervening in bond markets, pledging to mop up Italian and Spanish bonds, demand for risky assets is likely to diminish.

Following the data release, the Dow Jones FXCM Dollar Index rallied into the North American session, trading as high as 9597.96, but having since pared back its gains, to 9591.52, at the time this report was written. The index remained well-supported off of its lows, at 9516.52, having appreciated nearly linearly since 07:00 GMT. 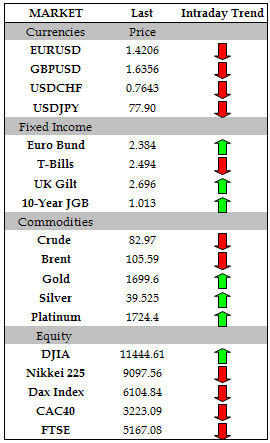 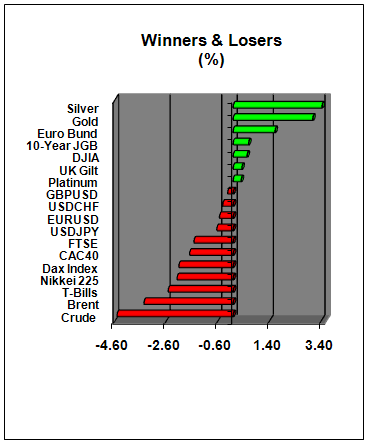 • U.K.’s Rating May Depend on Osborne’s Cuts – Bloomberg