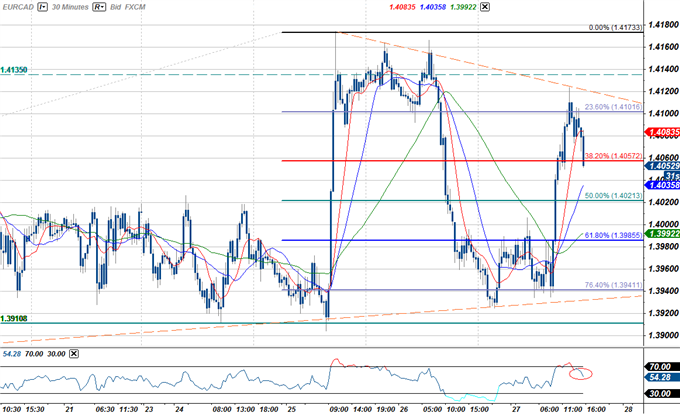 In Tuesday’s Scalp Report we offered setups that are were contingent on shifts in market sentiment with the recent surge in risk appetite triggering all our topside targets on the aussie and the sterling, and all the downside targets on the loonie. Today’s massive rally in risk fueled by optimism regarding the European rescue plan and stronger than expected US economic data has been broad based with a surge in volatility in FX markets pushing some pairs through key levels. As noted in today’s Scalping Strategies Webinar, the recent volatility has presented new setups with today’s report focusing on the EUR/CAD and the GBP/USD.

The EUR/CAD pair saw a sudden spike on Tuesday after the Bank of Canada rate decision, where dovish remarks from the central bank weighed on the loonie. We noted yesterday that the cautious outlook from the BoC was partly predicated upon the risk posed by the European crisis with Finance Minister Jim Flaherty noting that, “Canada is not immune to those recent global pressures and they will continue to limit growth in Canada for the remainder of this year and in 2012.”Increased concerns that a “brief” recession in Europe and a slowdown in the US and China had the BoC warning of external factors that could weigh on the domestic economy. Although far from a sustainable long-term solution for Europe, the rescue package does avert an imminent default out of the region and with a string of positive data out of the US, pressure on the loonie may start to subside. Coupled with an expected short-term pullback in the euro, our short-term outlook on the pair will be weighted to the downside. Note that longer term forecasts do call for the pair to move higher and accordingly our topside limit remains very tight.

*Note that short-scalps will not be active until a break below 1.4055 or a rebound off the 1.41figure with RSI conviction. We will remain flexible with our bias on the back of this recent run-up with a move passed 1.4170 eyeing topside targets. 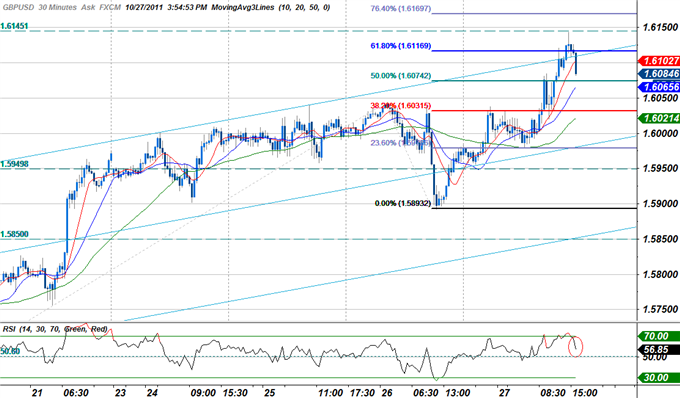 Recent price action has offered fresh reference levels from which to take our extensions. Aside from a brief false break in the US session, price action continues to hold within the confines of an Andrew’s pitchfork taken from price action from October 13th through the 18th. As noted in today’s Winners/Losers Report, the sterling has been the laggard among the majors despite a sharp and substantial sell-off in the greenback. With the Bank of England recently increasing the size of its asset purchases to £275 billion and increasing concerns of undershooting the 2% target for inflation, the pound is likely to remain under pressure here. Having said that, we cannot rule out further topside moves as the dollar sinks further and accordingly we leave room for long scalps with a breach above 1.6145.

*Note that short-scalps will not be active until a break below 1.6075 or a rebound off 1.6115 with RSI conviction. We will remain flexible with our bias on the back of this recent run-up with a move passed 1.6170 eyeing topside targets.