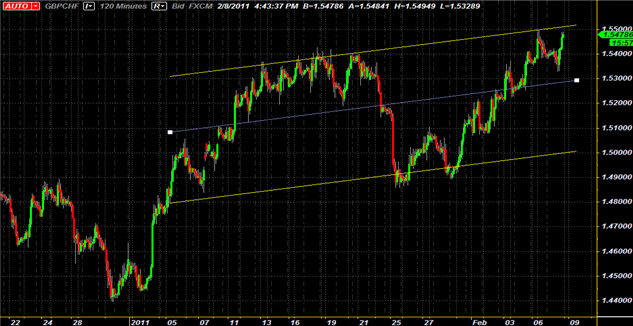 The GBP/CHF pair has reached its highest levels for 2011, though the next few days should present an opportunity for traders to catch profits to the downside as the pair looks set to retrace some of its gains from the first few weeks of the year. Although some potentially market moving data is expected out of Britain early in tomorrow’s session, the data appears to be poised to weigh negatively on the Pound, boosting the potential for scalping opportunities between now and the data release. Nonetheless, extremely overbought conditions on short-term and medium-term charts signal Franc strength in the near-term.

The GBP/CHF has been in an ascending channel since the beginning of the year, currently touching its highest levels thus far in 2011. Nonetheless, the near-500-pip range over the past ten days on the back of heavy fundamental data signals that the GBP/CHF, although more volatile than one would prefer, offers opportunities to scalp profits. Despite the pair moving above its 61.8 Fib retracement on the move from November 18 to December 30, the 1.5500 level represents significant resistance, and small swings are expected as the pair tests this level before potentially moving lower back within the channel. The next level of support for the GBP/CHF is the 100-SMA, at 1.53251. 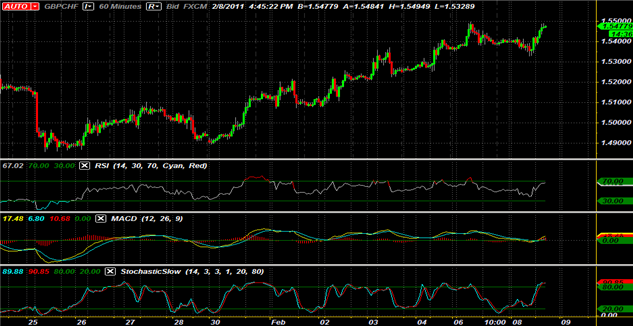 Looking at the 60-minute charts, the ascending channel appears more defined, looking back to January 25. The GBP/CHF has rebounded off of the range bottom just below 1.4900, and short-term technical indicators point towards losses as the pair is extremely overbought. The RSI is approaching overbought levels on the 60-min chart, currently at 67.02. The MACD Histogram differential is positive, though momentum is shifting negative, signaling a sell. Furthermore, the Slow Stochastic has issued asell signal, with %K at 89.88 and %D at 90.85.

Heading into the next few hours, with an ATR of 166 on the daily charts, it appears there is significant room for the GBP/CHF to move, especially lower within the channel. Volatility has decreased for the pair over the past few days, as the ATR has declined for four consecutive days. On the 15-minute chart, the pair appears to have hit resistance just below 1.5500, which is struggled to make it to early today. Trading on the RSI on the 15-minute charts within the channel has presented opportunities for traders to identify tops and bottoms for the GBP/CHF pair, and coincidentally, resulted in 40- to 100- pip gains per move. 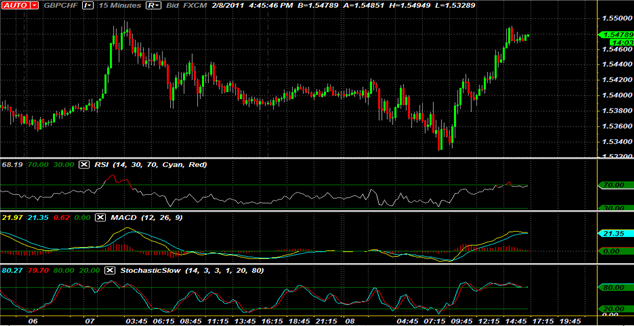 Although the pair is expected to break lower from a technical standpoint, there are some fundamental events over the next twenty-four hours that could prevent this. With no data due from the Swiss side, the fundamental event risk comes from Britain: trade balance data is expected during the European session. However, with the trade deficit expected to widen, only a significant miss on expectations could boost the GBP/CHF pair upwards. The docket remains light until Thursday after the British trade data.